Shakherezada and Pretty Woman to meet at Orchestra Parade in Almaty 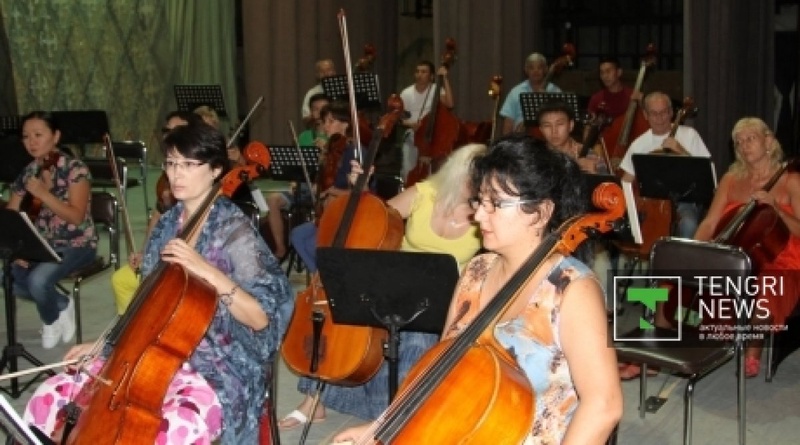 At the rehearsal. Photo by Alisher Akhmetov©
The organizers of the Orchestra Parade promise a mixture of cultures during three days of the fest in Almaty, Tengrinews.kz reports. The open air ballet troupe of Gediminas Taranda will perform Shakherezada ballet in Almaty. The Russian troupe will show the story of Shakherezada and sheikh Shakhriyar from the One Thousand and One Night with Kazakh folk instruments orchestra Otyrar Sazy playing the Rimsky Korsakov music. “This never happened before. This is a premier and this is extremely difficult. Classic and ethnic music tend to stay apart. Mixing cultures and styles is very important for me. We are moving the way we are supposed to move,” Gediminas Taranda said. “The whole idea was to mix the Imperial ballet with our national orchestra. People here are not really fond of serious music. I think that Shakherezada will be a good choice,” one of the organizers, Marat Omarov said. The performance will then be staged in Saint-Petersburg and Moscow and maybe other countries. The show called Pretty Woman with dancers of the Imperial Russian Ballet will be another attraction of the Orchestra Parade. “20 young women will show a catwalk in ballet shoes. They will walk on toes for four minutes. When we showed that in Moscow, people thought that the shoes had 30cm heels, as they were walking in ballet shoes,” Taranda said. The organizers also told about selection of music for the event. The soundtracks to the movies were selected to attract a wide range of audience. “I personally want young people to start listening to orchestra music. Not many people know that Mozart’s music is played in the Twilight. Tomorrow they will hear the melody they know and learn the name of the composers. Some of them will change their attitude to the orchestra music,” Omarov said on the eve of the show. The 3-day concert is expected to be attended by around 4 thousand spectators. The Orchestra Parade will be traditionally opened by Otyrar Sazy Academic Folk-Ethnographic Orchestra. The second day will include compositions from popular movies performed by the Symphonic Orchestra of Abai State Academic Theater and Ballet Theater. The final day will also be dedicated to soundtracks, but those from famous cartoons. The state wind band led by Kanat Akhmetov and Aleksander Belyakov will perform compositions from Aladdin, Lion King and other cartoons. The Orchestra Parade will be held in Almaty on August 23 to 25 on Abai Square (at the crossing of Dostyk and Abai streets). It will start at 7 p.m. The entrance is free of charge. However, the seats will cost 1,000 tenge ($7). By Alisher Akhmetov