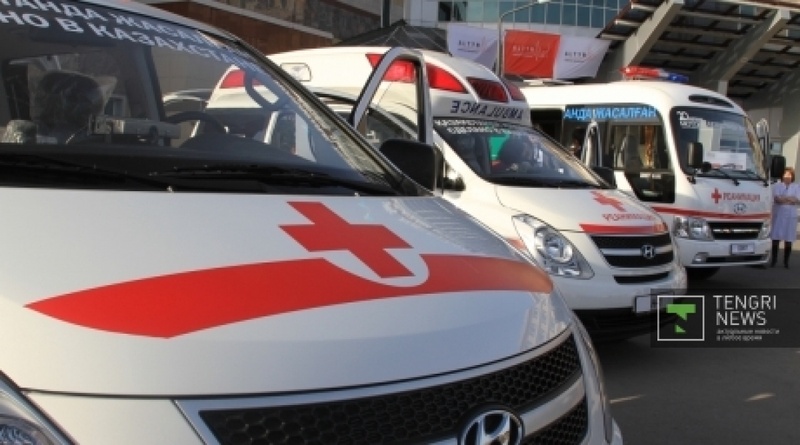 Reanimobiles and emergency ambulance cars. Photo by Danial Okassov©
The first ambulance bus was presented in the National Center of Medical Aviation and Emergency Ambulance on April 24 in Astana, Tengrinews.kz reports. “Speaking of the the ambulance bus models we can say that H1 model is already in use in Almaty and other cities. We have used County model only as 18-28-seat passenger coaches. This bus is acknowledged to be safe and reliable in Kazakhstan's automobile market. Both the drivers and the passengers like the bus very much. These buses are easy to maintain, safe and simple to run. That’s why we decided to use this bus model to provide emergency medical aid,” Director of Hyndai Auto Truck&Bus Shalkar Nurtleuov said. He said that the vehicles presented in the Center had been assembled in Kazakhstan. Until then all Hyundai emergency ambulances were imported from South Korea. “We are presenting Kazakhstan-assembled cars today. We are aware of the state tender that has been announced recently. It is for the supply of more than 2000 ambulance cars all over the territory of Kazakhstan,” Nurtleuov said. Nurlan Akhilbekov, head of the National Center of Medical Aviation and Emergency Ambulance, said that ambulance cars and particularly County model required some changes in the interior equipment. But after the re-equipment it could well be used as the mobile mini hospitals. “It can even be used as a surgical ambulance station; County bus could be used in remote rural areas. It could be used as a mobile ambulance station in case of road accidents and emergency situations as well. It is possible to make internal rearrangements in the bus so that two or three patients can be treated simultaneously in the bus. This would give us a small mobile ambulance station,” Akhilbekov said.