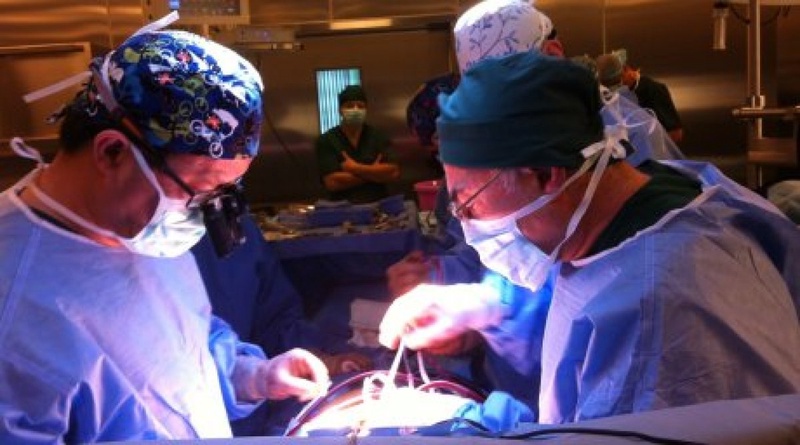 Implantation of the artificial heart. Photo courtesy of the National Medical Holding©
The first full implantation of an artificial heart has been made in Kazakhstan,
Continuation
1.
Kazakhstan doctors transplanted donor heart for the first time
Tengrinews.kz reports citing the press-service of the National Medical Holding. “There is still no organs transplantation in our country. Our doctors are ready for it, both the general surgeons and the cardiac surgeons, i.e. the medical parts of the issues are solved. Everything else is in place. But there are social, legal and moral issues. Our society is not ready for organs donorship and the mentality does not allow to widely implement it. But, despite of these problems, there are patients and we have to treat them. Installation of the artificial heart is currently one of the solutions,” Yuriy Pya said. What makes the surgery so special is that this is the third such surgery in the world. The first one was made in Germany, the second one in the U.S. and the third one in Kazakhstan. The artificial heart was implanted to a 61-y.o. citizen of Astana suffering from a heavy abnormity of the heart-vascular system. The patient had severe heart problems in the last 3 years. He received hospital treatment several times and refused to undergo surgeries in the past, but considering the deterioration of his condition and progression of the cardiac decompensation, he was hospitalized to the National Scientific Cardiosurgical Center. During the surgery the surgeons fully removed his right and left ventricles and implant two HEARTWARE pumps for artificial blood flow to the atriums. The pumps can pump up to 10 liters of blood per minute, which complies with the normal heart work. “The patient is currently stable. His body still has to adapt. This is a complicated surgery,” Yuriy Pya said at the press-conference. Answering the journalists’ questions, Yuriy Pya stressed that such surgeries will be performed in Kazakhstan free of charge a part of the guaranteed scope of free medical aide. Its average cost in the world is around $500 thousand. Speaking of preparation for implantation of the artificial heart, the chief cardiac surgeon of Kazakhstan said that it was held for several years. The doctors’ team was trained in the U.S., Germany, Czech Republic, Lithuania, Italy and Spain. Complicated surgeries on implantation of the artificial blood flow devices have been performed in the National Scientific Cardiosurgery Center since 2011: artificial left ventricles of different modifications were implanted to 37 patients with severe cardiac decompensation. Such innovative technologies are an alternative and the only option for treatment of patients with final cardiac decompensation. Implantation of such devices allows to sustain the patient’s blood flow and enable them to wait for the donator organ.