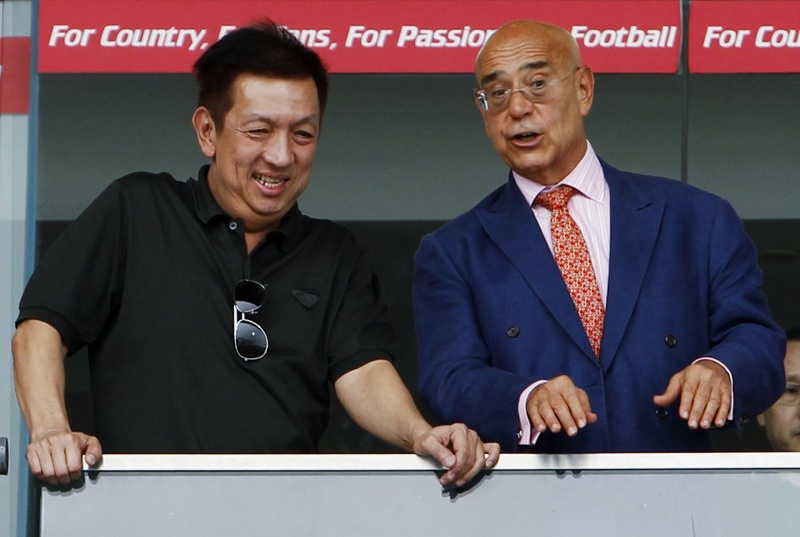 Singaporean billionaire Peter Lim (L). ©Reuters/Edgar Su
Singaporean businessman Peter Lim has made a bid to take over financially stricken La Liga side Valencia and wipe out its debts, AFP reports citing the club's president Amadeo Salvo. The club's hierarchy has been looking for investors since principal creditor Bankia refused earlier this month to refinance the combined 306 million euro ($418 million, £256 million) debt the club and its foundation has with the bank. Salvo said that Bankia had still to give the green light to Lim's proposal and had asked for more time to study other offers. However, he insisted that given the 60-year-old is willing to clear the club's debts and invest heavily in the playing squad, Lim's would be a difficult offer to match. "He has made us a proposal that will clear the debt owed by the foundation and Valencia to Bankia and will invest a significant amount in the first team immediately," said Salvo. "It is one of the best two or three biggest offers made for a club in world football." Moreover, according to Salvo, Lim has set a deadline of January 15 for the offer to be accepted so the club can reinforce their squad in the January transfer window with the hope of challenging for the Champions League places come the end of the season. Lim has previously been linked with investment in football clubs, most notably when he bid for Liverpool in 2010, and has a net worth of $2.3 billion, according to American business magazine Forbes. Valencia fortunes on and off the field have suffered since a financial crisis struck Spain in 2009. The club have been unable to finish work on their new Mestalla stadium and have had to sell a number of their best players. And last week it was announced that Valencia are one of seven Spanish clubs to be investigated by the European Commission for alleged illegal state aid for the role in which local government played in guaranteeing the loans taken out by the club from Bankia.