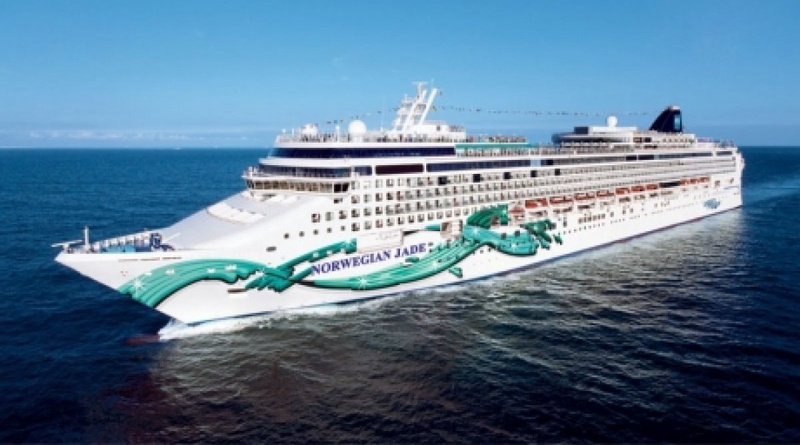 Photo courtesy of cruiselinefans.com
Kazakhstan tourists will be staying on board of a five-star liner during the Sochi Olympics, Tengrinews reports citing the press-service of the Industry and Tourism Committee of the Kazakhstan Ministry of Industry and New Technologies. "The tourists from Kazakhstan, who will be cheering for our athletes at the Winter Olympics in Sochi, will stay on board of Norwegian Jade five-star cruise liner. The vessel was commissioned in 2006 in Germany. It has 1,190 passenger rooms that can accommodate 2,376 passengers. The liner has its own entertainment complex (restaurants, swimming pools, animation and livestream)," the press-service of the Committee said. The Committee was paying a lot of attention to security issues when choosing the place for the Kazakhstan's delegation lodging. The liner is moored in a secure area and, certainly, closely to the main sports and culture venues of the Winter Olympics. There will be a two lines of passage control (the 1st one at the terminal and the 2nd one at the ship) and automatic monitoring of guest's baggage at the territory of the port. The participants of the meeting considered the experience of previous Summer and Winter Olympics and the course of preparations for the forthcoming Sochi Olympics. Chairman of Industry and Tourism Committee Marat Igaliyev stressed the importance of educating the Kazakhstan tourists about the safety rules adopted by the Russian authorities for the Olympics, and making sure that Kazakhstan tourists are insured. According to Complete Service, the official passenger agent for the 22th Sochi Winter Olympics approved by the National Olympic Committee of Kazakhstan and the Organizing Committee of the Sochi 2014, the tour to Sochi with lodging in the five-star liner will cost around $7,000 per person for the Kazakhstan citizens, who are going to support Kazakhstan’s athletes during the Olympics. For example, the trip per person for the period from February 6 to 15, with accommodation in a single room (standard room) will cost $7,850. And the trip to the closing ceremony -- for the period of February 8-26 -- will make $8,200. The cost of the tour includes the cost of Almaty-Sochi-Almaty flight, lodging in the liner, transfer (airport-sea port-airport), tickets to competitions (ceremony and 5 competitions), transfers to the competitions, an excursion, a fan passport and a medical insurance. The fan passports are going to be introduced at the Sochi Olympics for the first time ever for safety reasons. It will be impossible for a person to enter the city of Sochi during the Olympics without such passport. Meanwhile, the company told Tengrinews fans could book their own tours. The organizers explained that the tour package includes tickets to the events that are participated by Kazakhstan athletes only. Besides, the company said that tickets to Olympic events for two or three days could be bought for $1,200. The Agency for Sport and Physical Education told Vesti.kz who will enter the Olympic delegation. The delegation will count the total of 250 people. "The delegation will include 30 veterans of sport, 35 young athletes, 40 journalists, around 40 single-discipline specialists, 10 representatives of the Sports Agency. We have also formed a list of our sponsors: 20 representatives of Samruk-Kazyna Fund and 10 representatives of KazRosGas. Around 20 parents of Olympic athletes will also join the delegation. The other members of the delegation are the people who will set up the press-center," the head of Top-Class Sports and Sport Reserve Department of the Agency Serik Zharasbayev said. Athletes will be competing in 8 different sports: ski racing, biathlon, figure skating, speed skating, short track, sledding, freestyle and ski jumping at the Olympics. 17 leading foreign experts, including highly qualified lubricators of skis and sport medics have been contracted to help prepare Kazakhstan national teams for the Olympics. The President of Kazakhstan Nursultan Nazarbayev is expected to attend the opening ceremony of the Winter Sochi Olympics. The Olympic Games will take place on February 7-23, 2014.