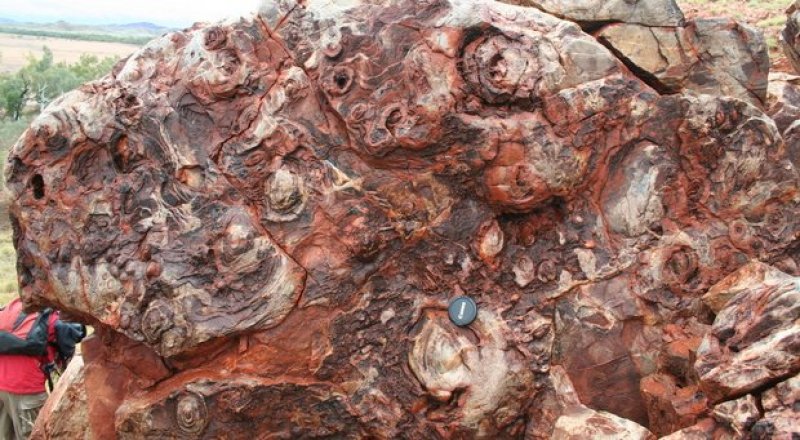 The 'egg carton' stromatolites at the Trendall Reserve are among the oldest known structures regarded as biogenic in origin. Photo courtesy of dmp.wa.gov.au

Life on Earth is even older than we thought, said Australian scientists on Thursday as they unveiled fossils dating back a staggering 3.7 billion years, AFP reports.

The fossilised structures -- called stromatolites -- preserved in ancient rocks along the edge of Greenland's ice cap were 220 million years older than the previous record holders.

They prove that life emerged just a few hundred million years after the Earth was formed some 4.5 billion years ago, said lead researcher Allen Nutman of the University of Wollongong.

"This discovery represents a new benchmark for the oldest preserved evidence of life on Earth," Professor Martin Julian Van Kranendonk, a geology expert at the University of New South Wales and one of the study's co-authors, said in a statement.

"The structures and geochemistry from the newly exposed outcrops in Greenland display all of the features used in younger rocks to argue for a biological origin. It points to a rapid emergence of life on Earth."

The one-to-four centimetre (0.4-1.6 inch) high Isua stromatolites -- exposed after the melting of a snow patch in the Isua Greenstone Belt -- matched other biological evidence on the evolution of the genetic code that placed the origins of life in a similar period, Nutman said.

He added that the discovery could help the hunt for life on Mars, considered the most likely location for microbial life-forms among other planets in the Solar System.

The Red Planet is believed to have once run with water and had an atmosphere, which together with warmth, could provide the right conditions for bacterial life.

"The significance for Mars is that 3,700 million years ago, Mars was probably still wet and probably still had oceans and so on, so if life develops so quickly on Earth to be able to form things like stromatolites -- it might be more easy to detect signs of life on Mars," Nutman told AFP.

"Instead of looking at just the chemical signature, we might be able to see things like stromatolites in images (from Mars) sent back to Earth."

The earliest evidence of life on Earth ahead of the Greenland discovery was made in 2006 when Australian and Canadian researchers dated microfossils in rocks from Pilbara's Strelley Pool Chert formation at more than 3.4 billion years old.

The findings are published in the journal Nature.