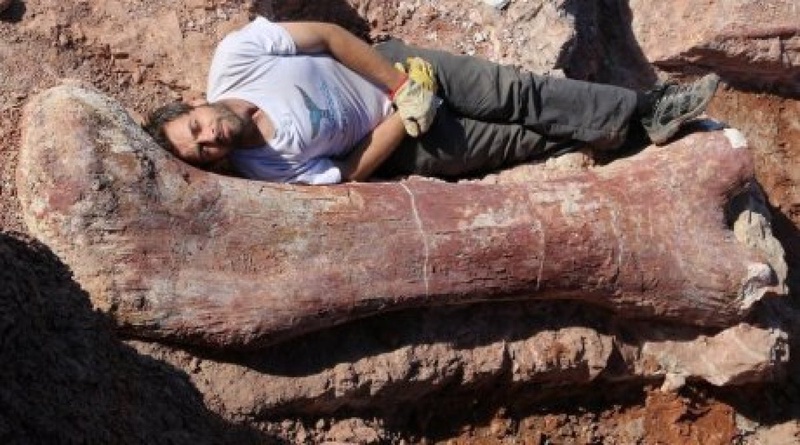 Paleontologists in Argentina's remote Patagonia region have discovered fossils of what may be the largest dinosaur ever, amid a vast cache of fossils that could shed light on prehistoric life, AFP reports.

Continuation
1.
In Argentina, dinosaur hunters embark on next phase

The creature is believed to be a new species of Titanosaur, a long-necked, long-tailed sauropod that walked on four legs and lived some 95 million years ago in the Cretaceous Period.

Researchers say the plant-eating dinosaur weighed the equivalent of more than 14 African elephants, or about 100 tonnes, and stretched up to 40 meters (130 feet) in length.

Photos show a fossilized femur larger than the paleontologist pictured next to it.

Further exciting researchers, bones from at least seven individual dinosaurs, including some believed to be younger, were found at the site.

This is "the most complete discovery of this type of giant dinosaur in the world, a momentous discovery for science," cheered Jose Luis Carballido, one of eight scientists who participated in the research.

The fossils were accidently discovered in 2011 by a farm worker in a remote area in the Patagonian province of Chubut, some 1,300 kilometers (800 miles) south of Buenos Aires.

Excavations starting January 2013 also uncovered complete bones of the tail, torso and neck -- which will allow for a fuller picture of what the entire animal looked like when alive.

The 36-year-old scientist, one of a team of Argentine and Spanish researchers, said the group had uncovered "10 vertebrae of the torso, 40 from the tail, parts of the neck and complete legs."

"Until now, what was known, worldwide, about sauropods was from fragmentary discoveries," said Carballido, a paleontologist at the Egidio Feruglio Museum in the southern Argentine city of Trelew, calling the find "extraordinary."

Tip of the iceberg

Even more bones may be forthcoming, Carballido said.

So far, "we have only recovered an estimated 20 percent of what's in the field," he said.

The researchers have also found what they believe to be muscle insertions, which will help them reconstruct the form of the creature's muscles and calculate how much energy was needed to move them.

The find will also be able to shed light on more than just the anatomy of these remarkably large herbivores.

Paleontologists have found about 60 teeth at the site, 57 of which are from Tyrannotitan carnivores -- one of the largest known therapods, and known scavengers.

In addition to the skeletal remains, fossil imprints of leaves and stems have been found that will help researchers "completely rebuild the ecosystem," he said.

"We will be able to make a very precise reconstruction and answer many questions," the scientist said -- including just what about southern Argentina made conditions favorable for so many massive dinosaur species.

So far, the new species remains unnamed, and scientists estimate they will publish the first results next year.

"The research will be done in several stages. First we will present the new species, its characteristics," Carballido said, followed by years of study to detail the animal's biology and "the way it grew up."

Paul M. Barrett, fossils and anthropology expert at London's Natural History Museum, cautioned that claims this dinosaur is the largest ever still must be confirmed.

"This is an inspiring new discovery of a truly gigantic dinosaur," Barrett said.

"However, we need to know more about the overall size and proportions of the skeleton and use several different methods to investigate its possible width before deciding it's definitely the largest dinosaur species yet known."

US paleontologist David Burnham agreed that "a lot of things still need to be proven."

But largest dinosaur or not, the breadth of the discovery was truly remarkable, he said.

"You can really start reconstructing past life when you get a treasure trove like this," the University of Kansas expert added.

Finding so many individuals at one site could confirm the hypothesis that these herbivores lived in herds, as well as answer other questions like "what fed on them; were they scavengers; timing of death, the environment they lived in."