Kazakhstan to manufacture cars with China 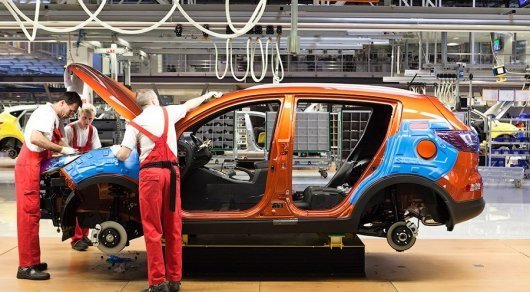 President Nazarbayev's official visit to China has given the Kazakh-Chinese relations a boost. So, for example, Kazakhstan signed a memorandum on cooperation in manufacturing of cars with China.

Andrey Lavrentyev, the Chairman of the Board at Allur Group automotive company announced future cooperation with China's JAC Motors.

"Today we celebrate a big event. We have signed the long awaited memorandum on cooperation in creation of the (Kazakh) national brand. We have signed a trilateral memorandum with Chinese JAC Motors and a major export and import agency CMC (China National Machinery IMP. & EXP. CORP) to manufacture JAC cars and start a strategic partnership in creation of the national brand," Lavrentyev said.

No further comments on the national brand have been made so far.

He stressed that JAC Motors showed great potential in the development of electric engines. "The company is one of the leaders in the Chinese market in production of hybrid and electric cars. Here we see how our interests coincide, because we want to develop as a country with long-term development capacities and new technologies that give us high export potential. JAC Motors is one of the transnational companies with engineering bureaus in Italy and other European countries, including the United States. It was not a coincidence that we chose this company," Lavrentyev said.

JAC Motors that is known as China Anhui Jianghuai Automobile Co LTD is a national Chinese company that has been producing buses and cars since 1999. Today, JAC Motors is a modern high-tech enterprise included in the top 5 Chinese car manufacturers.

According to Exportgov.kz, Allur Group represents six internationally known car brands in the Kazakh market. The company is both a national producer and official distributor of SsangYong, Iveco and Peugeot brands and the official dealer of Suzuki, Mitsubishi and Geely. Allur Group was "the first to start CKD assembly operations including welding and painting" in Kazakhstan. This year the company launched the first CKD SUV SsangYong Nomad and began assembling Toyota Fortuner CKD.