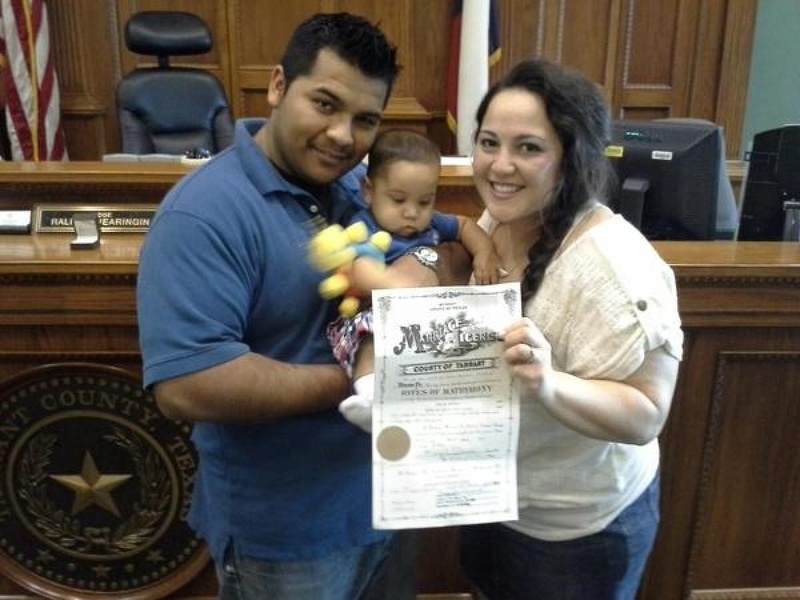 Erick Munoz, Marlise Munoz and their son. Photo courtesy of ibtimes.com
The fetus being carried by a pregnant American woman already declared brain dead is "distinctly abnormal,", AFP reports according to her family's lawyers. The body of Marlise Munoz, 33, has been maintained with technology for almost two months because of her pregnancy. She collapsed at her Texas home in late November due to a possible pulmonary embolism as she got up care for her first-born son, who is now 15 months old. Munoz, who is under care at John Peter Smith Hospital in Fort Worth, was declared dead there based on neurological criteria, meaning her brain can no longer keep her body alive and functioning. But state law demands she be kept alive so long as she is pregnant. Her family maintains that she is dead, and should be disconnected from life support. Munoz was admitted to the hospital on November 26. Attorneys for her family said medical records on the fetus showed a discouraging outlook. "According to the medical records we have been provided, the fetus is distinctly abnormal," attorneys Heather King and Jessica Janicek said in a statement. "Even at this early stage, the lower extremities are deformed to the extent that the gender cannot be determined." They said the fetus suffers from hydrocephalus, a condition in which there is an abnormal accumulation of fluid in the cavities of the brain. They pointed to "further abnormalities," including a possible heart problem, though the conditions cannot be determined accurately because Munoz's body is immobile. "Sadly, this information is not surprising due to the fact that the fetus, after being deprived of oxygen for an indeterminate length of time, is gestating within a dead and deteriorating body, as a horrified family looks on in absolute anguish, distress and sadness," the statement added. "Our client's position is that the statute prohibiting the withholding of life-sustaining measures from a pregnant patient does not apply to the dead. "Were that to be true, then it would be incumbent upon all health care providers to immediately conduct pregnancy tests on any woman of child bearing age who becomes deceased, and upon determining the deceased body was pregnant, hooking the body up to machines in an attempt to continue gestation. Surely, such a result was never intended nor should it be inferred," the lawyers stressed. Texas is among 12 US states that have adopted strict laws requiring that a woman be kept alive if pregnant, regardless of the stage of her pregnancy.