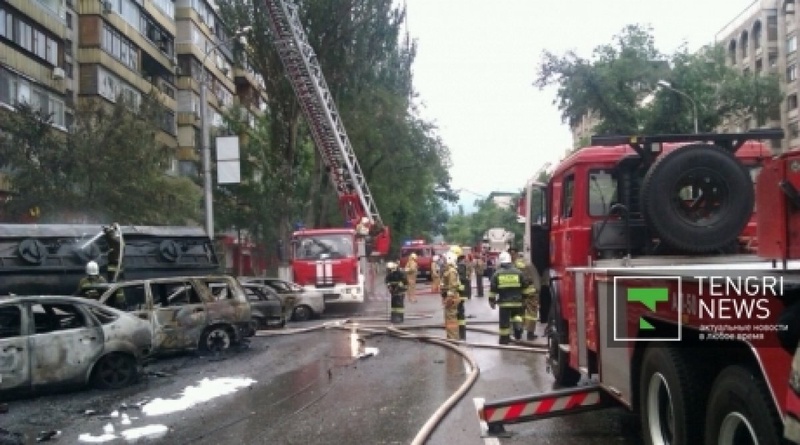 At the accident site. ©tengrinews.kz
The fire next to Rixos hotel in Almaty caused by Helios petrol tank trunk has been eliminated, Tengrinews.kz reports. The fire-quenching operation involved 350 people, 14 fire-fighting trucks and 40 other vehicles. It was a second category fire. According to preliminary information, it covered the area of around 400 square meters. 20 out of 40 apartments in the nearby apartment building caught fire. All citizens are alive and there were no victims among the residents, head of Almaly region of Almaty Serik Kussainov said. The burnt cars that were parked next to the accident site will be transported to the city parking lot for further investigation and compensation. The residents of the building will be temporarily relocated to the nearest school where food and tents have been made available. Psychologists and doctors are already working with the building's residents. The road police is now investigating is the tank truck had a right to drive along the route (many of the main streets of the city have restriction on trucks traffic making them detour along less important streets). They will also check the truck’s technical condition to investigate the cause of the accident. The petrol tank lorry exploded near Rixos hotel in Almaty at the crossing of Seifullin and Kabanbay Batyr streets. The truck’s driver died at the accident site. The fire moved on to RealSport sports shop, and #138 Kabanbay Batyr residential building. Burning fuel was flowing down along the gutters as far as 250 meters off the accident site setting everything in its way on fire.