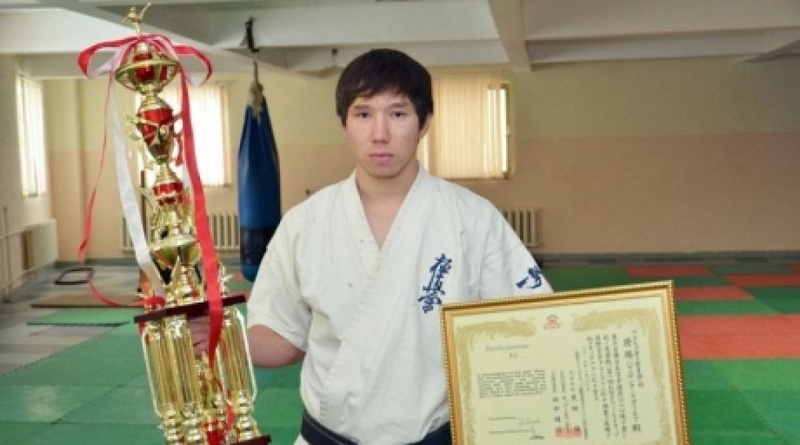 Baurzhan Kumiskaliyev. Photo courtesy of azh.kz
24-y.o. Baurzhan Kumiskaliyev from Atyrau won the World Cup title in the Grand Prix series of kyokushin kaikan in Tokyo, Japan, Ak Zhayik reports. According to Aslan Duisenbay, Oblast Kyokushin Karate Federation’s president, Atyrau athlete showed excellent results at the tournament. “The Kazakhstan fighter knocked out Japan’s Taushuko Namiki by axe kicking him at his head in his first fight. He won against another Japan’s karateka Rumi Aikawa in the second fight. Then he defeated Poland’s Marseille Perechnyak,” Aslan Duisenbay said. “Baurzhan left no chances to Armenia’s Hrachik Grigoryan as he landed his kicks on his legs. Baurzhan then experienced the toughest fight against Japan’s Hirofumi Endo. The Kazakhstan karateka kept attacking his rival and made him hunker down into a deep defense during the duel. As the result, Baurzhan was awarded with the victory by hantei (the majority opinion of the referee and the two corner judges) to dissatisfied jeers of local fans. This is understandable, because fans are always unfair,” Duisenbay said. Kazakhstan TV channel reported that about 800 karateka from 17 countries participated in this prestigious tournament in Tokyo. The Kazakhstan national team consisted of 21 fighters from Mangistau, Atyrau, Karaganda oblasts of Kazakhstan and Almaty city. The Kazakhstan team was ranked third in the overall ranking of the tournament. Kumiskaliyev won gold, and Yevgeny Akulov from Karaganda along with two Manistau fighters Bereket Nurbayev and Nurlan Dzhuldassov won three bronze medals.