Breakthrough in hunt for HIV vaccine 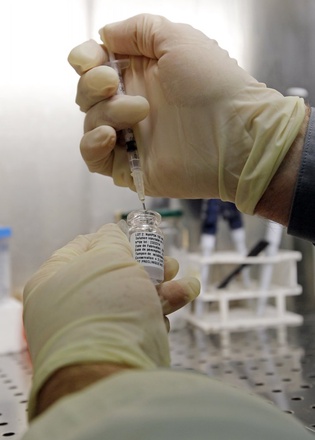 ©Reuters/Jean-Paul Pelissier
US scientists seeking to unravel the mysteries of HIV have made an important breakthrough after capturing the clearest image yet of a protein which allows the deadly virus to attack human immune cells, new research showed Tuesday, AFP reports. Scientists at The Scripps Research Institute (TSRI) and Weill Cornell Medical College have managed to obtain a detailed view of the atomic structure of the protein which envelops HIV, the virus which causes AIDS. The development could potentially pave the way for a vaccine, according to the findings published in the US journal Science. "In order to develop a vaccine, you have to understand what bits on that very important trimeric protein can be recognizes by broadly neutralizing antibodies," said Scripps Institute cell biologist Bridget Carragher. "And in order to understand that, you need to understand what the structure of the thing looks like. "Then once you do, you can start designing a vaccine that will mimic that thing and elicit an antibody response and get the human being to fight the real virus when it comes along." Although sophisticated antiviral drugs have been used to manage HIV infections in many developed countries, a vaccine against infection has proved elusive. The failure to find a vaccine is often attributed to the complex nature of HIV's envelope protein, known as Env. The delicate structure of Env has hampered efforts to obtain the protein in a form that allows for the atomic-resolution imaging necessary to fully understand it. "It tends to fall apart, for example, even when it's on the surface of the virus, so to study it we have to engineer it to be more stable," said TSRI biologist Andrew Ward. However the researchers were able to engineer a version of the Env trimer, or three-component structure, that has the stability required for atomic-resolution imaging. The scientists were then able to study the Env trimer using cutting-edge imaging and electron microscopy. The use of X-ray crystallography allowed researchers to examine the Env trimer in more detail than previous attempts. The data also shed light on the process by which Env assembles and later shifts shape during infection, and also allowed researchers to make comparisons with protein envelopes from other deadly viruses such as flu and Ebola.