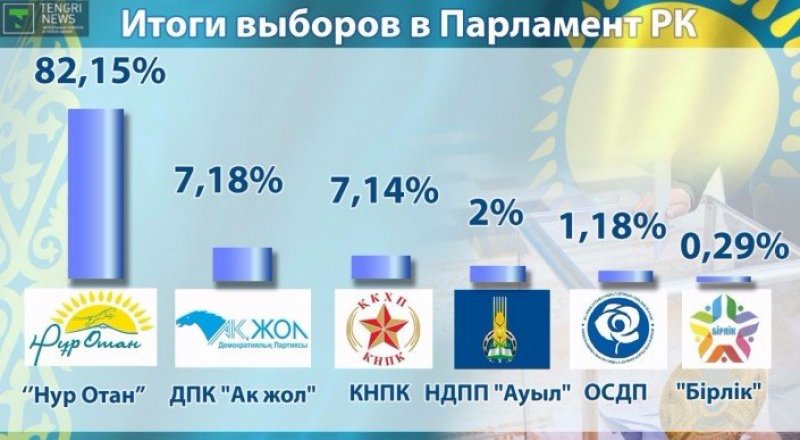 Results of the March parliamentary elections in Kazakhstan

According to the Central Electoral Commission (CEC) Nazarbayev's Nur Otan party won 82 percent of votes in Sunday's election and will share parliament with the pro-government People's Communist Party and Ak Zhol, who each secured just over seven percent of the vote.

The vote -- which saw little real opposition to Nazarbayev -- came as the ex-Soviet country sees its once-booming economy slump on the back of falling oil prices and an economic crisis in northern neighbour Russia, but the strongman's grip on power appears as firm as ever.

Celebrating the victory with supporters on Monday, Nazarbayev -- who during the poll warned outsiders "not to rush" Kazakhstan towards democracy -- said he was in a "joyful state" following the announcement of the results.

"Our party has won. The 77 percent turnout is a record and 82 percent of votes received for Nur Otan -- a record!" he said.

"We demonstrated to the whole world open, direct voting on a competitive basis in the presence of thousands of international observers and journalists."

But an international vote monitor mission headed by the Organisation for Security and Cooperation in Europe (OSCE) said Monday that "genuine political choice" was "insufficient" in the vote and that the country "still has a considerable way to go" in meeting international standards for democratic votes.

"Extensive reporting on the president's activities dominated in most media outlets, and the ruling party used his position to its benefit," the mission's special coordinator Marietta Tidei said.

Nazarbayev -- who maintains close ties with former master Moscow -- has ruledKazakhstan virtually unopposed since before its independence from the Soviet Union in 1991, and the 75-year-old was elected to a new five-year term last year with 98 percent of the vote.

Nazarbayev called the presidential vote ahead of schedule, with analysts saying he was keen to get elections over with in case the economic situation worsened.

Nazarbayev has not confirmed his intention to stand again when his term ends in 2020 and observers are eyeballing government appointments for any indications they might give of a potential heir emerging.

Three other parties competing on Sunday failed to clear the seven percent threshold to enter the parliament, including the only party claiming to represent the opposition.

The National Social Democratic Party (NSDP) said Monday it did not recognise the CEC tally which gave it just over one percent of the vote.