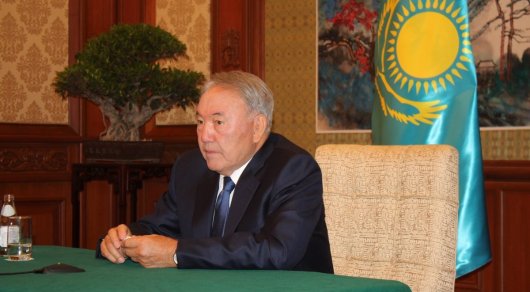 Nazarbayev paid an official visit to China on August 31 - September 3. Over these four days, he had several meetings with heads of leading Chinese companies as well as with Chinese President Xi Jinping and Premier of the State Council of China Li Keqiang.

Besides, Nazarbayev inked a number of deals totally worth $23 billion.

As part of his visit, he also attended the parade in Beijing held to commemorate the 70th anniversary of the Victory.

According to Nazarbayev, Kazakhstan has a lot to learn from the Chinese people. “We should learn diligence and discipline from the Chinese. A large number of people – nearly 1.5 billion – are living on this territory. They work as a single community to achieve common goal and better future. We also live and work in the same way. But, of course, it is impossible to compare China to Kazakhstan. However, their respect to Kazakhstan and friendly ties (between the two nations) is a matter of great sympathy and respect towards this country,” Nazarbayev said at a press conference for Kazakhstan’s media in Beijing.

He also highlighted that it was worth looking up to China in their fight against corruption. “They adopted a code of conduct for civil servants, which includes eight points and as you know the first of our (five) institutional reforms is aimed at the improvement of the civil service,” he pointed out.

Besides, while in China, Nazarbayev also congratulated Kazakhstanis on the first day of the academic year, celebrated in post-Soviet countries as the Knowledge Day. “Today is the Day of Knowledge, September 1. I congratulate all our schoolchildren, students and their parents on this wonderful day. 7,500 schools will open their doors to 2.6 million of our kids. What is most interesting is that 300,000 of them are first graders. It is the first time so many children go to the first grade,” the Kazakh leader said.

“All these years we have been building schools and kindergartens, because children are our future. Those, who are in the first grade today, will work in various sectors of Kazakhstan’s economy in 2050. The main point is how we teach them and what education we give them,” he emphasized.

The president believes that two most important things that parents can give their children is love and knowledge. “This is all we can give them before we send them off to their adult life. I know that Kazakhstani parents make every effort to educate their children and they do the right thing,” he said.

When speaking about Chinese reforms, Nazarbayev highlighted Chinese dream and Made in China programs and according to Nazarbayev, these are powerful reforms: “This is the Chinese step towards new technologies, so that China does not lag behind the rest of the world. We are very interested in new industries and modernization."

At the same time, he added that China had just started building intellectual schools, whereas in Kazakhstan there were 20 Nazarbayev Intellectual Schools. "Thus, we also have an advanced experience in some areas," Nazarbayev said.