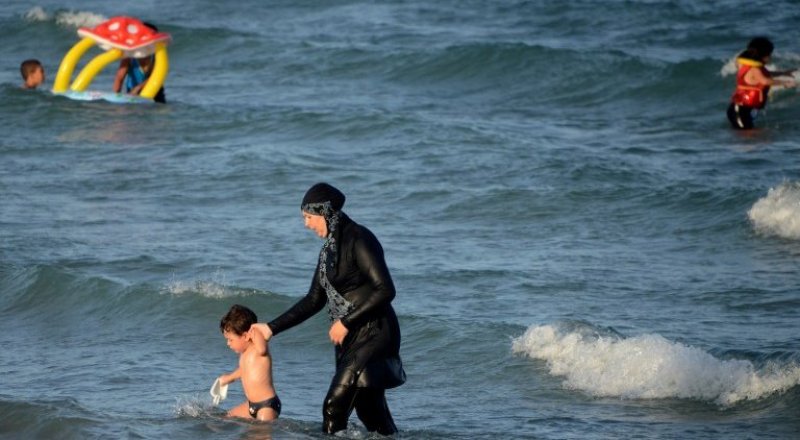 An angry debate over a ban on burkinis in France was further stoked Wednesday as images of a veiled woman surrounded by police on a beach in Nice went viral, AFP reports.

The series of photos published by British media showed a woman dressed in leggings, a tunic and headscarf lying on a beach surrounded by four police officers.

At one point the woman removes her tunic -- it is unclear if she was ordered to do so or did so of her own accord -- while a policeman appears to write out a fine.

The photos, whose source is not clear, caused a furore on Twitter, where many interpreted them as the woman being forced to undress by police.

Underneath the tunic, she was wearing a sleeveless top.

"Question of the day: How many armed policemen does it take to force a woman to strip in public?" Andrew Stroehlein, European Media Director of Human Rights Watch, wrote on Twitter.

A comment by an activist named Sihame Assbague, retweeted more than 7,000 times, said the scene has made France "the laughing stock of the world".

"I am so ashamed", wrote French feminist Caroline De Haas.

The hashtag #WTFFrance (What the Fuck France) was trending on French Twitter.

Nice is one of about 15 French towns which has banned the wearing of the burkini -- a full-body Islamic swimsuit which covers the head -- on beaches, with authorities declaring it to contravene French secular values and threaten public order.

But the vague wording of the bans, which refer to beachwear that conspicuously demonstrate a person's religion has created confusion.

Beachgoers have been left to puzzle over whether it refers solely to head-to-toe swimwear, which some non-Muslims wear for protection from the sun, or to being fully clothed and having one's head covered on the seashore.

A mother of two told AFP on Tuesday she had been fined on the beach in the resort of Cannes for wearing leggings, a tunic and a headscarf.

"I was sitting on a beach with my family. I was wearing a classic headscarf. I had no intention of swimming," said the 34-year-old who gave only her first name, Siam.

France's highest administrative court, the State Council, will on Thursday examine a request by the Human Rights League (LDH) to scrap the ban, enforced on some 15 beaches in the country.

Lower courts have supported the decision by French mayors, with a tribunal in the Riviera city of Nice -- where a crowd was mowed down in July in a grisly truck attack -- said the burkini could "be felt as a defiance or a provocation exacerbating tensions felt by" the community.