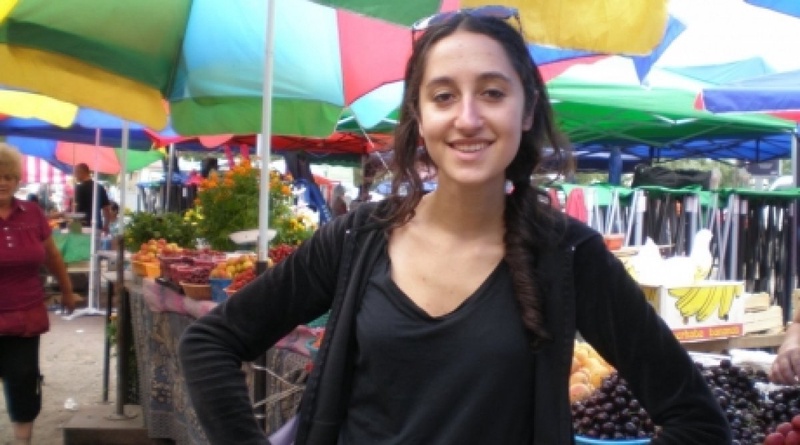 Dena Sholk, a graduate student in the School of Foreign Service from Georgetown University came to Almaty to research the role of baraholkas (markets) in Kazakhstan’s economy as a part of her dissertation fieldwork, Tengrinews reports.

Sholk arrived to Kazakhstan for the first time in 2011. She started her blog The Sholk Road Adventures on Central Asia to write about her experience of living and travelling in the region. Sholk wrote in her blog that she studied Russian at KIMEP University in Almaty. Seven month later, she received a Fulbright scholarship to study intercultural relations.

“Baraholka and all bazars are the only structures in Kazakhstani economy that developed naturally. I wanted to understand the system of a bazar from within. How the business is conducted and why people decide to work (at baraholka),” Sholk said. She said that when two years ago she applied for Fulbright, her main research goal was finding a job at Almaty baraholka. “I have an acquaintance who works as an instructor in Almaty. He found me an internship at baraholka with a flexible schedule through his friends. I work there around 3-4 days a week from 9 a.m. to 6 or 7 p.m. Sometimes I work more, sometimes less, it depends on the workload. It is a very valuable experience, because I have never had such physical load as I do here. In the beginning, to tell the truth, I was overwhelmed. But now I am grateful to baraholka workers for their kindness and attention,” the researcher said.

Her knowledge of Russian that has been growing ever since she started learning the language three years ago helps Sholk in selling shoes at the baraholka. According to the American graduate student, many buyers were very surprised when she told then that she came from the States to work at a local baraholka.

“I get this reaction all the time. But as a researcher I am interested in lots of things, and in particular I am interested in people’s reactions,” Sholk said. She added that people did not consider baraholka as a place for real business. “In fact, that is not correct. People working there are real entrepreneurs,” she explained. According to Sholk, baraholkas and trade are major institutions in Kazakhstan’s economy.

“I often read negative comments about baraholka workers in the media. But in turn, I want to say that they are very kind and hard working people. They deserve respect for being real deal entrepreneurs. They must be included into the economy development strategy. If the government wants to civilize trade, there is no need to get rid of bazars. To civilize trade, the whole customs systems has to be civilized along with simplifying registration procedures for small and medium-sized business and enhancing logistics,” Sholk said.

At the moment, there is a great deal of controversy around reforms at Almaty baraholkas. According to Sholk, when sellers obtain a container they do not become landowners. “The National Chamber of Entrepreneurs of Kazakhstan came up with a new plan for baraholka reforms that involves providing the entrepreneurs with ownership rights. It is a correct approach,” Sholk said. She agreed with Western political experts who believe that property ownership by middle class citizens helps democratic development.

Sholk is still working on her dissertation and plans to present her thesis on the role of baraholkas in Kazakhstan’s economy in three months.

According to the World Bank, the annual turnover of baraholkas in Almaty amounts to $1.7 billion. Commodities turnover in Kazakhstan in general amounts to $2.1 billion. The Ministry of Economy and Budget Planning reported that in comparison to developed countries, trade in Kazakhstan remains ineffective and non-competitive. Bazars and baraholkas make up 51% of the whole trade turnover and take up 67% of the shopping space, most of which are situated in Almaty. However, the World Bank considers bazars to positively affect the poverty levels and create new work places.