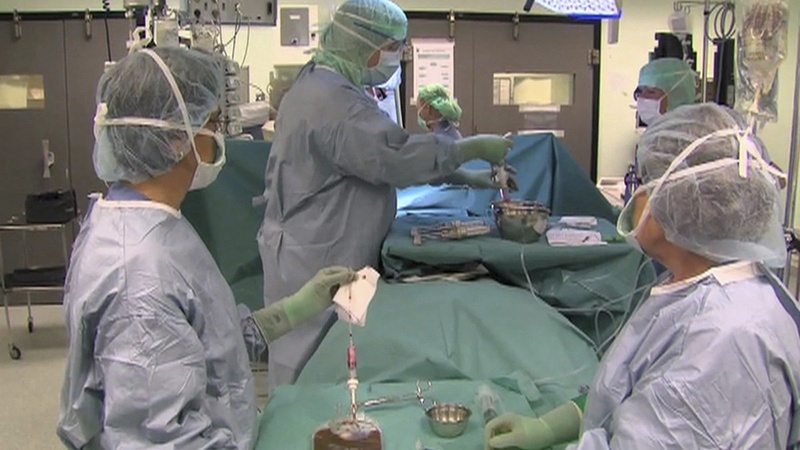 ©REUTERS/Karolinska University Hospital
An international team of surgeons has successfully given a South Korean-Canadian toddler a life-saving windpipe transplant made from plastic fibers and some of her own stem cells, AFP reports. Hannah Warren, 2, was born without a trachea and is now the youngest person to ever receive a bio-engineered organ, after an operation in the United States. She had spent her life in an intensive care unit in Seoul, with a feeding tube keeping her alive. Doctors had initially given her little chance of surviving. The nine-hour transplant was a life-saving surgery for the child, who was unable to breathe, speak, swallow, eat or drink on her own since birth. Because the procedure used stems cells from Warren's own bone marrow rather than a donor organ, her immune system is unlikely to reject the transplant. Doctors said she could return home and lead a normal life within months. "The most amazing thing, which for a little girl is a miracle, is that this transplant has not only saved her life, but it will eventually enable her to eat, drink and swallow, even talk, just like any other normal child," said lead surgeon Paolo Macchiarini of the Karolinska Institutet in Stockholm. "She will go from being a virtual prisoner in a hospital bed to running around and playing with her sister and enjoying a normal life, which is a beautiful thing." Scientists hope the stem cell-based therapy will diminish reliance on human organ donors and the associated risks of immune system suppression. "We are crossing frontiers with these transplants," Macchiarini said in a statement. Hannah arrived at the Children's Hospital of Illinois in the US city of Peoria in March with a medical team, her Canadian father Darryl, mother Young-Mi and four-year-old sister Dana. The operation took place on April 9. "All we have ever wanted since Hannah was born was to be able to bring her home and be a regular family," Warren's father Darryl said. "Hannah has been through so much and defied the odds. She is our little miracle," he said. "Words cannot express our thanks to everyone who has helped make this dream a reality. We know one day soon we will get to make that trip home."