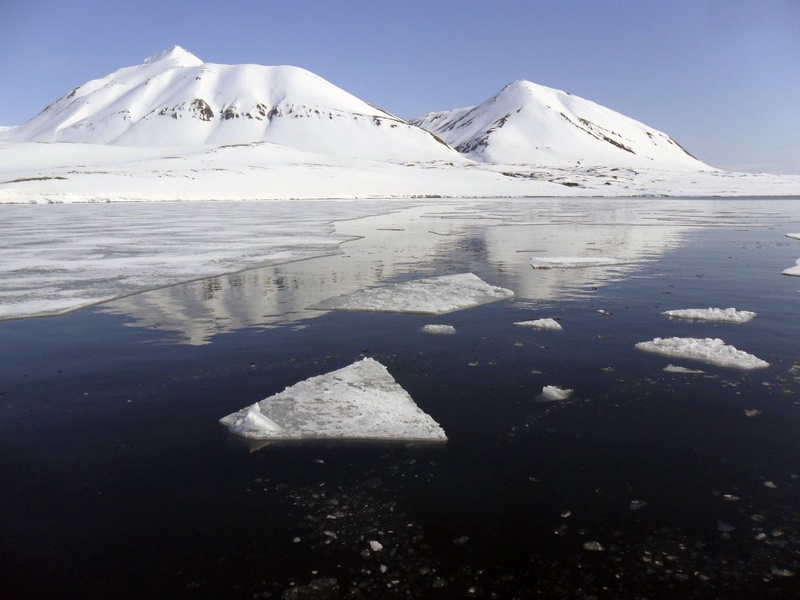 ©REUTERS/Reuters Staff
The sea ice in the Arctic Ocean has melted to its smallest point ever in a milestone that may show that worst-case forecasts on climate change are coming true, AFP reports citing US scientists. The extent of ice observed on Sunday broke a record set in 2007 and will likely melt further with several weeks of summer still to come, according to data from the National Snow and Ice Data Center and the NASA space agency. The government-backed ice center, based at the University of Colorado at Boulder, said in a statement that the decline in summer Arctic sea ice "is considered a strong signal of long-term climate warming." The sea ice fell to 4.10 million square kilometers (1.58 million square miles), some 70,000 square kilometers (27,000 square miles) less than the earlier record charted on September 18, 2007, the center said. Scientists said the record was all the more striking as 2007 had near perfect climate patterns for melting ice, but that the weather this year was unremarkable other than a storm in early August. Michael E. Mann, a lead author of a major UN report in 2001 on climate change, said the latest data reflected that scientists who were criticized as alarmists may have shown "perhaps too great a degree of reticence." "I think, unfortunately, this is an example that points more to the worst-case scenario side of things," said Mann, director of the Earth System Science Center at Penn State University. "There are a number of areas where in fact climate change seems to be proceeding faster and with a greater magnitude than what the models predicted," Mann told AFP. "The sea ice decline is perhaps the most profound of those cautionary tales because the models have basically predicted that we shouldn't see what we're seeing now for several decades," he added. Arctic ice is considered vital for the planet as it reflects heat from the sun back into space, helping keep down the planet's temperatures. The Arctic region is now losing about 155,000 square kilometers (60,000 square miles) of ice annually, the equivalent of a US state every two years, said Walt Meier, a scientist at the National Snow and Ice Data Center. "It used to be the Arctic ice cover was a kind of big block of ice. It would melt a little bit from the edges but it was pretty solid," Meier told reporters on a conference call. "Now it's like crushed ice," he said. "At least parts of the Arctic have become like a giant slushie, and that's a lot easier to melt and melt more quickly." The planet has charted a slew of record temperatures in recent years, with 13 of the warmest years ever taking place in the past decade and a half, along with extreme weather ranging from severe wildfires in North America to major flooding in Asia. Researchers have also reported a dramatic melt this summer on the ice sheet in Greenland, which could have major consequences for the planet by raising sea levels. Scientists believe that climate change is caused by human emissions of carbon and other greenhouse gas emissions. But efforts to regulate emissions have faced strong political resistance in several nations including the United States, where industry groups have said that regulations would be too costly for the economy. Kumi Naidoo, the executive director of Greenpeace who on Monday intercepted a Russian ship in the Arctic, said the ice melt showed that the planet was "warming up at a rate that puts billions of people's future in jeopardy." "These figures are not the result of some freak of nature but the effects of man-made global warming caused by our reliance on dirty fossil fuels," he said in a statement. Shaye Wolf of the Center for Biological Diversity pressure group called the record ice melt "a profound -- and profoundly depressing -- moment in the history of our planet." The melt has rapidly changed the politics and economics of the Arctic region, with shipping companies increasingly eager to save time by sailing through the once-forbidding waters. Data released Monday by the Washington-based Center for Global Development found that nations including China, India and the United States were reducing the intensity of their carbon emissions but that the effort was overwhelmed by the surge in power consumption in developing nations.