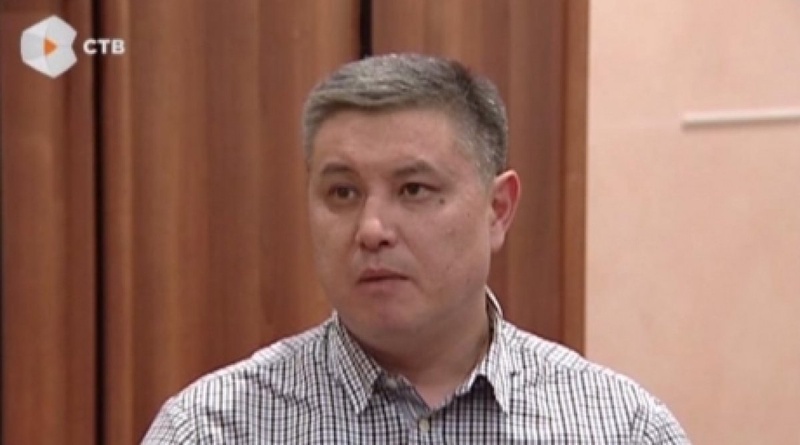 Murat Kadyrbayev. STV channel frame
Murat Kadyrbayev – father of Dias Kadyrbayev, one of the Kazakhstan students detained in Boston – is shocked by the charges presented by U.S. authorities to his son. He gave an exclusive interview to Tengrinews.kz. Two Kazakhstan students Dias Kadyrbayev and Azamat Tazhayakov are charged with obstructing justice and are being kept in a federal prison in the U.S. They are not charged with any implication in the Boston bombings. The two 19-year-old teenagers knew Dzhokhar Tsarnayev because they all went to the same school – University of Massachusetts-Dartmouth – and they all spoke Russian. “I am shocked by the charges brought against them. As a father I am one hundred percent sure that my son could not possibly have had any relation to the tragic Boston events. He is only a teenager. He is still a kid. I am sure the boys couldn’t have committed any intended wrongdoing. They are only kids,” Kadyrbayev said. “The United States is the most democratic country. I rely on American justice and I hope that my son will be given a not-guilty verdict, because I am absolutely sure that he is not guilty and I consider all those accusations groundless. We are ready to defend our children even at the international level,” he continued. Murat Kadyrbayev said that he hadn’t seen his son since February when Dias came over to Kazakhstan for vacations. “The last time I spoke to him was after their first arrest. Back then he told me on the phone: ‘Dad, we have been arrested just like in an American movie. They came over in armored vehicles with a platoon of officers, with guns and laser sights. They undressed us. It started snowing. But we were standing like that until the search of our apartment ended. I am home now, we have been released, everything is alright, don’t worry Dad,’” the father said. Dias Kadyrbayev and Azamat Tazhayakov were first arrested on April 20 five days after the Boston bombings. There was a search in their apartment and they were questioned for almost a whole day because they were classmates of younger Tsarnayev brother. They were release and then arrested for the second time later the same day. The second arrest was made by migration authorities that believed there might have been some problems with their student visas (missing classes is considered a violation of visa regime for students). They spent over a week in jail, but charges related to visas have never been brought against them so far. They were questioned several times while in jail. And them on May 1 criminal charges were brought against them as a surprise move. Murat Kadyrbayev said that a U.S. attorney had been hired to represent his son and a representative of the Foreign Ministry of Kazakhstan was present at all the hearings. “There is no way I can contact him. All the information I get comes from the media or from the attorney and the ministry representative. I am sure that boys are cooperating and assisting the investigation. I very much hope that American justice authorities will straighten things out and it would be proved that our children are not guilty of any crime,” father of the Kazakhstan student detained in Boston said. Dias Kadyrbayev's attorney Robert Stahl told reporters that his client "absolutely denies" the charges” and that Kadyrbayev "assisted the FBI in this investigation." "He is just as shocked and horrified by the violence in Boston that took place as the rest of the community." Tazhayakov's lawyer, Harlan Protass, said his client was "shocked" to hear of Tsarnaev's alleged involvement, adding that he "has cooperated fully with the authorities and looks forward to the truth coming out." The next hearing of Kadyrbayev and Tazhayakov has been scheduled for May 14. Kadyrbayev and Tazhayakov face a maximum sentence of five years in prison and a $250,000 fine. Dzhokhar Tsarnaev was hospitalized with gunshot wounds in the neck and leg that he suffered in the police chase in which his brother was killed, has been charged with using a weapon of mass destruction and could face the death penalty.