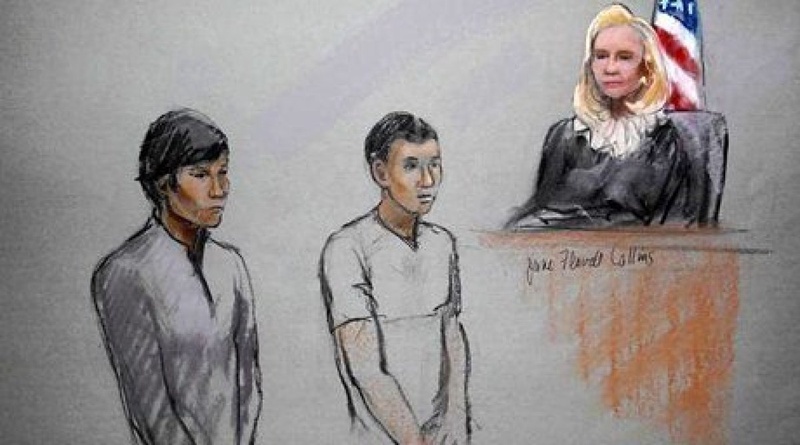 Dias Kadyrbaev and Azamat Tazhayakov at the court. Photo ©REUTERS
Imprisoned in the United States, Dias Kadyrbaev and Azamat Tazhayakov have been transferred into the same cell after months of daunting solitary confinement, Tengrinews reports. Otherwise their imprisonment conditions haven’t changed except that now got a chair and a desk. The transfer is a relieve for the families of the imprisoned Azamat and Dias who feared for the mental state of the young men when they were in solitary cells. Azamat’s father Amir Ismagulov considers solitary confinement an equivalent of torture. The lawyers of the young men repeatedly filed inquiries requesting mitigation of the confinement regime, asking to permit the young Kazakhstan nationals to go to a gym and walks. No decision regarding their inquiries hasn't been made yet, but it is still a relieve for Azamat and Dias to be in the same cell. As Tengrinews reported earlier, Azamat and Dias were each in solitary confinement in a 3x2 meter cells (7'x10') with nothing but a bed in the Middletown prison which is an hour drive from Boston. “The day starts at 6 a.m., then there is breakfast at 6:30 a.m., later a lunch 10 a.m. and dinner at 4 p.m.,” told Kadyrbayev. Azamat and Dias have an hour a day or less for phone calls. Before the transfer the young men haven’t seen each other, except the times they were brought to the court. The first hearing was on August 13 in 2013. The lawyers asked the court to reveal the materials on the case, stating that otherwise it would be difficult to develop a defense. However, the prosecution objected, noting that the disclosure of the case materials would negatively affect the process. The court agreed to consider the inquiry. The next hearing is to take place on January 15, 2014. In defense of Azamat and Dias their friends created a group on Facebook - it currently has 636 members - which is called Freedom to Dias, Azamat and Robel Days!. They have signed a petition demanding fair treatment by the prison guards for the young men.