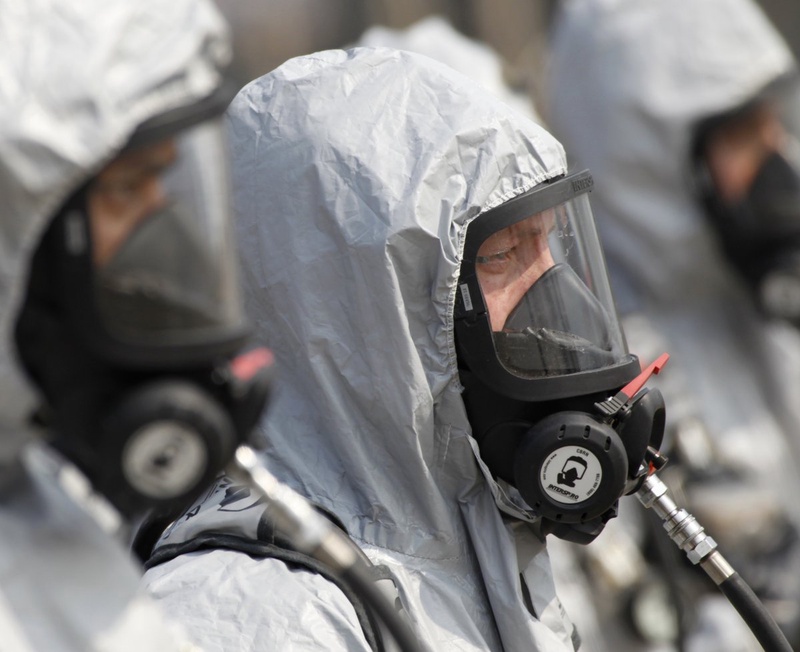 ©REUTERS
US President Barack Obama issued a new warning to Syria Friday that using chemical weapons would be a "game changer" as he faced rising pressure at home and abroad to intervene in the civil war, AFP reports. But a day after US officials said they suspected that the deadly agent sarin had already been fired off in small-scale attacks, Obama warned Washington must act prudently, and establish exactly if, how and when such arms were used. Obama, who had previously told Syrian President Bashar al-Assad the use of chemical weapons would cross a "red line," promised a "vigorous" US and international probe into the latest reports. But he appeared wary of launching military action based on initial intelligence reports of chemical weapons use, even as other official comments and media suggested that is exactly what had happened. Obama did reiterate that the use of chemical weapons would be "a game changer," as he met Jordan's King Abdullah II in the Oval Office. "I think all of us, not just in the United States but around the world, recognize how we cannot stand by and permit the systematic use of weapons like chemical weapons on civilian populations," he said. But the US leader, who has been reluctant to plunge the US military into action in Syria after extricating it from Iraq, warned: "We have to act prudently. We have to make assessments deliberately." "We have seen very bad movies before when intelligence is perceived to have driven policy decisions that in the full light of day have proven wrong," a US defense official said on condition of anonymity. The official was referring to assertions -- later proven false -- by former president George W. Bush's administration of weapons of mass destruction in Iraq, the justification for a 2003 invasion that brought eight years of war that killed nearly 4,500 US soldiers and tens of thousands of Iraqis. Adding to the political heat on Obama, the Syrian opposition urged the UN Security Council to take immediate steps, possibly even by imposing a no-fly zone. And British Prime Minister David Cameron said the growing evidence that Assad had turned chemical agents on his own people was "extremely serious." The fighting in Syria, which the UN says has left more than 70,000 dead since March 2011, showed no signs of abating Friday, with fresh clashes outside the capital Damascus and elsewhere across the country. The United States opened a potentially serious new dimension to the Syria conflict when it said for the first time on Thursday that Damascus had likely used chemical weapons against rebel forces. White House spokesman Jay Carney said Friday the White House wanted to establish "credible and corroborated" facts to determine whether the red line has been crossed. He stressed that "all options remain on the table," a euphemism hinting at possible military action. Washington backs a United Nations investigation into the use of chemical weapons in Syria. Damascus has asked for a UN probe but has since refused to let a UN team into the country. A UN spokesman said that investigators from the world body had started collecting evidence outside Syria on the suspected use of chemical weapons. UN Secretary General Ban Ki-moon wrote to Assad with a new request for access. Syria's opposition urged the UN Security Council to act without delay. "Should it find the regime used such weapons, it must act immediately, at least by imposing a no-fly zone," an official from the main opposition National Coalition told AFP on condition of anonymity. During the 2011 uprising that ousted long-time Libyan dictator Moamer Kadhafi, the Security Council imposed a no-fly zone to prevent civilians being hit by regime air strikes. But the Council has been deadlocked over Syria for more than two years, with permanent members Russia and China backing Assad and vetoing several draft resolutions that would have threatened sanctions on the regime. The opposition National Coalition has accused the regime of using chemical weapons in the northern province of Aleppo, in Homs in the center and in rebel-held areas near Damascus. In London, Cameron -- whose Foreign Office confirmed it also had "limited but persuasive" evidence of the use of chemical agents -- said the international response would likely be political rather than military. "This is extremely serious. And I think what President Obama said was absolutely right, that this should form for the international community a red line for us to do more," Cameron told the BBC. The European Union was cautious, reiterating a request to Damascus to allow a UN chemical weapons probe in Syria. Israel led a push for military action. "From the moment the international community understands that red lines have been crossed and that chemical weapons have been used, they will realize there's no other choice than to react (militarily)," said Deputy Foreign Minister Zeev Elkin.