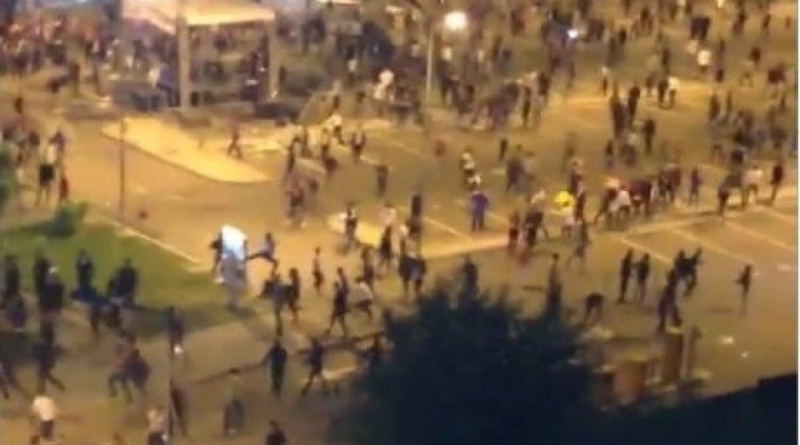 Still shot from Instagram / daikakz video
A disappointed mob is raging at Prime Plaza trade and entertainment center in Almaty at the crossing of Sain and Raymbek streets, Tengrinews.kz reports.
Continuation
1.
Popular Kazakh singer in midst of scandal less than year after another concert ended in violence
"I am standing on the roof of Prime Plaza. The mob is raging inside. They've crashed all the equipment. The police is unable to control them," Kazakhstan TV presenter Daniyar Batrybayev wrote in his twitter. "Special police forces have arrived. The mob of young people has started running down Ryskulov street," he wrote. According to him several policemen and people from the crowd have been injured: "Ambulances and coming and going." "A car has been overturned and burnt at Sain street. More police arrived. The throng is moving along Raymbek street in the western direction," he continued. According to the latest information "the commotion moved over to Ak-Bulak village near Almaty (Raymbek and Ryskulov streets)." Here is a Youtube video from the site (by Samson Bezmyatechniy): The outburst is allegedly a protest against cancellation of Kairat Nurtas' (a Kazakh pop singer) concert that was supposed to be held at the Prime Plaza. You can watch more videos here. Prime Plaza's VKontakte page says that the final of the karaoke battle "Zapoi po pyatnitsam" ("Singing on Friday") was scheduled for August 31 at 7 p.m. and that Kairat Nurtas is supposed to take part.