Kiev in flames as clashes leave trail of destruction 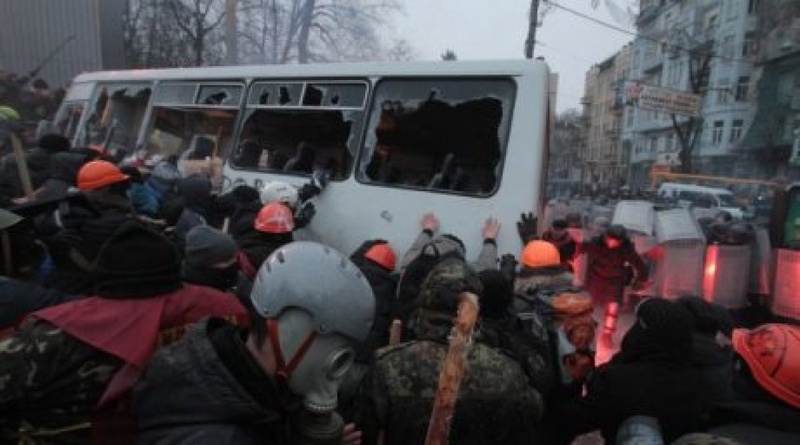 ©RIA Novosti
The flames from buses set ablaze lit up the night sky, protesters dug up stones from the pavement to hurl at police and the stench of tear gas hung thick, in unprecedented scenes in Ukraine's capital Kiev, AFP reports.
Continuation
1.
Wolves in sheep clothing: possible involvement of foreign forces in Kiev
In a standoff resembling a pitched battle, anti-government protesters sought to break a police cordon guarding the passage to official buildings, using almost any implement they could get their hands on as a weapon. Molotov cocktails were hurled at the police as demonstrators launched periodic charges armed with baseball bats, sticks and chains at the line of security forces. They moved back before launching another surge. The main opposition leaders behind two months of protests against President Viktor Yanukovych disowned the actions which appeared to have been launched by well-organised groups of radicals. Some of the protesters donned surreal outfits of Soviet-era gas masks to protect themselves from the tear gas sprayed by police coupled with warm ski clothing in a bitter evening with temperatures well below freezing. With the interior ministry warning it was filming every minute of the event, the protesters covered their faces with balaclavas and scarves to hide their identity. At the epicentre of the clashes in the centre of Kiev outside the iconic football stadium of Dynamo Kiev, the noise echoed of stun grenades thrown by the police and the relentless drumming by the protesters on metal barrels. "We are going to stand right to the end," chanted the hundreds of protesters engaged in the clashes. As a deluge of stones thrown by the protesters rained down on them, the security forces sought to protect themselves by adopting the "tortoise" formation of covering themselves with their shields. Demonstrators set five police buses and two trucks on fire. According to a police statement all but one of the vehicles were completely destroyed. After over 10 hours of clashes, the security forces sought to win the upper hand by stepping up the use of water cannon but the protesters remained defiant. "Tell everyone that we need more petrol for the Molotov cocktails. Write this on Facebook," said one. Police also used rubber bullets, for the first time in almost two months of protests against the government's refusal to sign a deal with the European Union. Activists said these caused dozens of injuries. Others complained about the shortcomings of the mainstream protest movement which has so far failed to offer a major challenge to Yanukovych. "Look there is not a single MP here," another protester was heard saying. "We do not need these weaklings." A hard core of several hundred protesters were engaged in the clashes as several thousand more looked on in support. The noise from the stun grenades and the beating of the drums echoed round the city and showed little sign of letting up as the clocked ticked well past midnight. Staying at the scene for a long period without a gas mask was almost impossible due to the concentration of tear gas. Those without gas masks crouched down low to the ground where the air was cleaner.