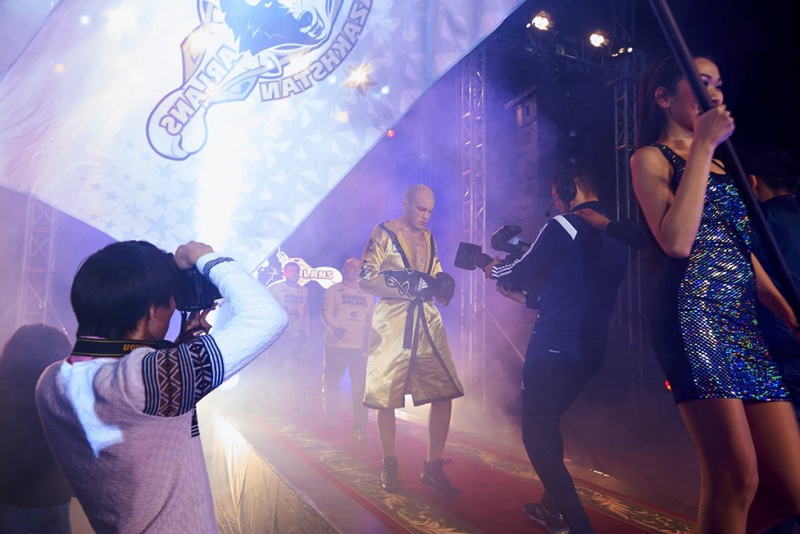 This Saturday in Astana, the Astana Arlans took over the Baku Fires in the first leg of the WSB semifinals. The Kazakhstani Alpha Wolves beat the Bad Boys 3:2, Tengrinews reports citing Vesti.kz

Continuation
1.
Miracles of Fire: The real story behind Arlan's loss to Baku Fires

Two debutants of the 4th season Temirtas Zhussupov from the Astana Arlans and Khamza Nametov’s of the Baku Fires opened the night in the light flyweight (-49kg) category. Zhussupov took the first two rounds with confidence. Nametov was more active in the following rounds, but Zhussupov did not let go of the first victory easily. The young Arlan claimed the first victory of the semifinals with the score of 49:46, 49:46, 50:45.

In the bantamweight (-56 kg), Madi Shulakov fought against Gairbek Germakhanov. Despite beautiful and precise boxing during his debut bout, Shulakov’s was less active in the fight agaist the Azeri boxer. Germakhanov was serious about tying up the scores. Shulakov lost to Germakhanov 49:46, 49:46, 45:50.

“I wanted to keep him at a distance and get the opponent with counterattacks. (…) But he was faster and more active. I thought I won anyway considering the number of direct hits,” Shulakov said after the fight.

Germakhanov said that he had been preparing for Bagdat Alimbetov instead and fighting Shulakov was a surprise for him. “But we were able to find the right tactics (…). Madi Shulakov is a really good boxer. I’m thankful to him for the good and aggressive fight,” Germakhanov said.

In the light welterweight (-64 kg), Askhat Ualikhanov (3WP) faced experienced Azeri boxer Gaybatulla Gadzhialiyev (5WP). Both boxers were pounding at each other with determination. With almost even scores, Ualikhanov worked hard to tilt the scale in his favor. But in the end, the referee raised Gadzhialiyev’s arm. It marked Ualikhanov’s second defeat in his first season at WSB.

The General Director of the Astana Arlans Bolat Mankenov commented on Ualikhanov-Gadzhialiyev fight.

“Because of a mistake of the judges, we did not win Ualikhanov’s fight even though he won four rounds. (…) I always count directly landed punches missed by our boxers and in five rounds I counted six punches made by the opponent,” Mankenov said.

After three fights the Baku Fires were leading the score 2-1. But it was too early to celebrate as a Urkanian Arlan and WSB iron-fist superstar Sergei Derevyancheko climbed into the ring to fight the Baku Fires bad boy Soltan Migitinov in the middleweight (-75 kg). Derevyanchenko who has remained unbeaten for 4 WSB seasons is a real hero for Kazakhstani fans. He clearly dominated the ring in three rounds landing heavy jabs and crosses at Migitinov. After the third round, the coach took off Migitinov’s gloves and the referee announced a TKO. Derevyanchenko added another TKO to his impressive record – 16 WO/7TKO.

“What tactics I used? I wanted to KO Sergei Derevyancheko. Certainly, I had a chance to win on points, but he is an experienced boxer. Boxers like Derevyancheko must be KOed,” Migitinov said after the fight.

The Arlans evened the score to 2-2 and now it was up to the heavyweights (-91 kg) to determine who would leave the ring with victory.

An unbeaten debutant of the 4th season Vasiliy Levit (5WP/1TKO) got in the ring to face Abdulkadir Abdullayev (4WP / 3TKO / 2KO) of the Baku Fires who was Arlan’s first opponent on week one. During the first week, Levit, yet a newbie, outclassed his experienced opponent in an intense bout. This time, the 26 y.o. Arlan with 5 bouts under his gloves stood ready to beat Abdullayev again. And that was exactly what Levit did. Five rounds ended with 49:46, 50:45, and 50:45 in Levit’s favor and the victory in the first leg of the semifinals was ultimately awarded to the Astana Arlans.

“I knew that I was not only fighting for myself but also for the whole team. It gave me a boost of strength (…),” Levit commented after the bout.

The first leg of the WSB semifinals ended with the victory of the Astana Arlans in their home ring. Next, the Wolves are traviling to Guba, Azerbaijan to meet the Bad Boys in the second leg of the semifinals on May 3rd.

Will the Wolves be able to defend their Championship title? The Arlans are confident of their victory and for now that is all we need to know.