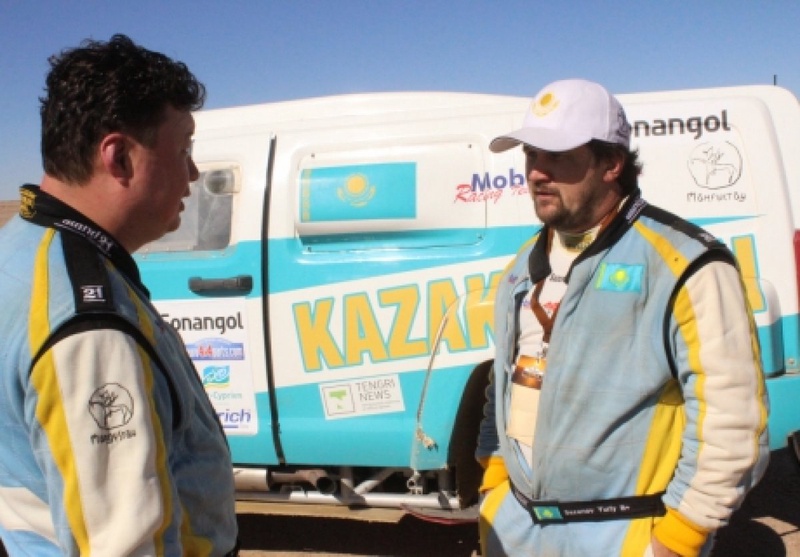 Pilot Kanat Shagirov and navigator Alexandr Moroz. ©vesti.kz
Kazakhstan's Mobile Racing Team crew of Shagirov and Moroz - #206 - driving Hammer H3 in T1 class, have successfully completed 5 stages of the rally raid in Africa and gained the
Continuation
1.
Racing: Kazakhstan's Shagirov and Moroz in 4th place overall at Africa Eco Race 2014
2.
Africa Eco Race: despite setbacks Kazakh crews press on
3.
Kazakhstan racers complete Africa Eco Race 2014
5th place in the general ranking, being 1 hour 20 minutes and 36 seconds behind the leaders, Vesti.kz reports. To gain this high overall ranking the Kazakhstan crew had to successfully complete the first five stages of the race: Pilot Kanat Shagirov and navigator Alexandr Moroz completed the fifth stage of Africa Eco Race 2014 in the 4th place driving the 204km distance in 1 hour 55 minutes and 40 seconds. Before that they finished the fourth stage in the 12th place, covered the third stage in the 3rd place, won the 8th place in the second stage and finished the first stage in the 6th place. And another crew of Mobile Racing Team from Kazakhstan - pilot Yuriy Sazanov and navigator Arslan Sakhimov - is in the 12th place in the general standing after the 5th stage. They are driving Hammer H3, #208. The crew of Sazanov and Sakhimov covered the fifth stage in 1:57:38 which brought them the 6th place in the stage. Before that the duo completed the fourth stage of the rally raid in the 3rd place, covering 402km in 4:38:44. They were the 7th at the third stage, finished the second stage in the 17th place and the first stage of the rally in the 13th place. The French crew of Jean Louis Schlesser and Thierry Magnaldi is the leader of the rally's general standing. They are followed by Jacques Loomans and Frits Driesmans from Belgium and Jean Antoine Sabatier and Denis Rozand from France. The second week of the rally raid - the 6th stage of the Africa Eco Race - starts on January 6 after a full day of rest in Boulanouar city, Mauritania.