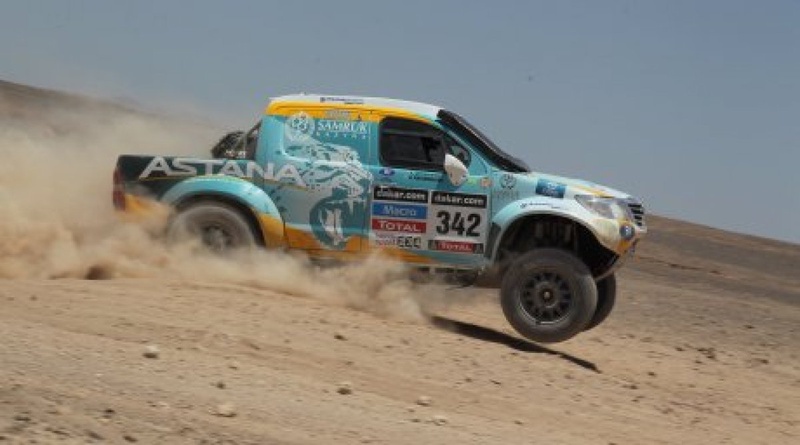 Photo courtesy of the press-service of the Astana Motorsports
Kazakhstan's racers of Astana Motorsports Team have completed the eleventh stage of the Dakar 2014,
Continuation
1.
Kazakhstan racing crews approach final straight of Dakar rally
2.
2 Kazakhstan crews in Top 20 of Dakar 2014
Tengrinews reports. The distance from Antofagasto to El Salvador wasn't so easy to cover. It had a difficult high-speed special section that was a key one for the overall success. The racers overcame all the difficulties the Atacama Desert held in stock for them, including several river beds. The Kazakhstan racers took their chance to shoot forward and improve their positions in the Dakar's overall. The truck crew of Arthur Ardavichus, Alexey Nikizhev and Radim Kaplanek moved 5 lines up to the 16th place in the general ranking of the race. They finished the eleventh stage in the 14th place. "Today was a good day, a Dakar's hard one," the bronze winner of the Dakar 2012 Arthur Ardavichus said, "Navigation of the stage was complex, including in its parts with rocky serpentines and high climbs. We had to drive on sharp mountain edges give on the very spine of the ridge from one mountain to another. We had everything: high altitudes, sharp climbs and descents, sand and rocky river beds in this stage. The track was very tough. We found a setting solution for our vehicle that allowed us to stabilize the truck on the track only today. Can you imagine, we had to drive through almost the whole Dakar to figure out one small detail that was causing instability in our vehicle." The Astana Motorsports car crew of Denis Berezovsky and Ignat Falkov retained the 35th place with the 45th stage result. "Today's special section made 605 kilometers. 100 kilometers out of them were sands. The hard sand section made 20 kilometers, but it appeared to be easier than it seemed, we passed them fast," pilot Denis Berezovsky said. Another off-road crew of Aidyn Rakhymbayev and Vladimir Demyanenko had some troubles during the route, because of rocks on the track. The crew still managed to finish the stage, but in the 51st place that moved them down to the 18th place in the overall. "We replaced only three tires during the 10 days of Dakar, and today we have replaced six. There were completely different rocks at this track that not only tore the tires but damaged the wheel hubs as well. In the end we lost a lot of time," Astana Motorsports polit Aidyn Rakhimbetov said. The racers are to complete two more stages of the Dakar 2014. The marathon rally started in the third most populous city of Argentina Rosario on January 5. The total length of the route makes around 9 500 kilometers before the racers will reach the finish in Valparaíso, Chile, on January 18.