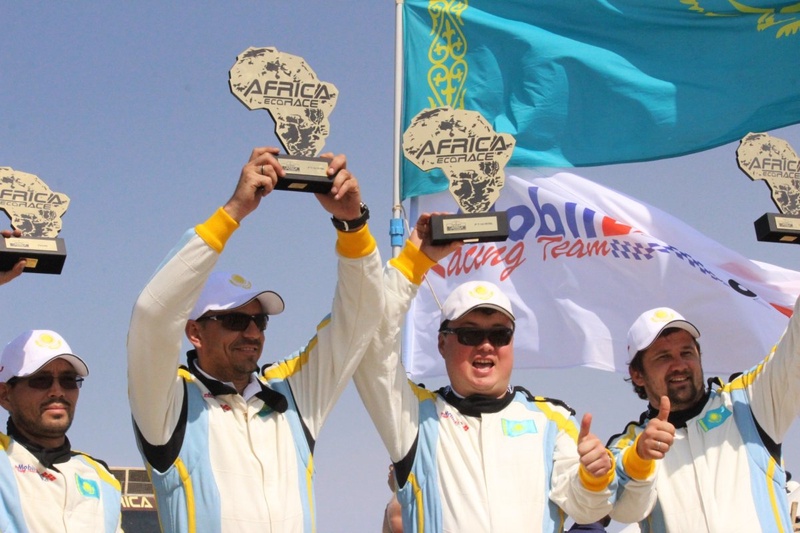 Yuryi Sazanov, Arslan Sakhimov, Kanat Shagirov and Alexandr Moroz. ©vesti.kz
The tenth stage of the prestigious marathon rally Africa Eco Race 2014 took place on January 10, 2014, Tengrinews reports citing Vesti.kz. The total length of the Mauritania-Senegal stage made 494 kilometers. The special section of the stage was located at Mauritanian territory. Racers of Kazakhstan's Mobile Racing Team Yuryi Sazanov and Arslan Sakhimov (#208) ended the tenth stage in the 23rd place covering it in 4 hours 17 minutes and 37 seconds. The crew gained the 13th place in the overall after this stage. "We were highly focused when we started the race, but after the second check point we had a problem with our rear wheel. It detached itself from the car when we were driving at the speed of 160km/h and rolled on all alone ahead of the car. We managed to retain control of the car, but the side panel and the wheel hub were in ruins. We stopped and started restoring the hub. It took us around 40 minutes. Then we continued driving at a very low speed, because the wheel was now fastened with only two bolts. And we kept this up until the finish line," Yuryi Sazanov said about the problems during the stage. Another crew of Mobile Racing Team -- Kanat Shagirov and Alexandr Shagirov, driving Hammer H3 Evo -- finished the stage in the 24th place in 4:20:38. The result brought the crew to the 16th place in the overall. "It was a fine special section with dunes, and we driving well. But our engine started misfiring and stalling 30 kilometers before the finish. We will figure out the cause later. But we believe that the quality of the local fuel is to be blamed for it. Despite the problems that #208 had (the rear wheel that fell off and the damaged side panel and wheel hub) our teammates (Sazanov/Sakhimov) stuck with the team spirit. They knew we had no changes of reaching the finish with our engine, and having fixed their own car only enough to crawl to the finish, they took our car in tow. That is why we reached the finish together," pilot Shagirov said after the stage was completed. "The goals set by our team have been partially achieved. Gaining experience of participation in large-scale races is our key goal at the current stage," navigator Moroz said. French crew of the famous pilot Jean Louis Schlesser and his navigator Thierry Magnaldi won the stage by covering the special section in 2 hours 21 minutes and 15 seconds. They retained the leadership in the overall of the marathon rally. Belgium crew of Jacques Loomans/Frits Driesmans won the second place at the stage and another Belgian crew of Stephane Henrard and Bruno Barbier won the third place of the 10th stage. Review of the 10th stage Sonagol Africa Eco Race-2014 that started on December 29, 2013 in St. Cyprien, France finished on January 11, 2014 in Dakar, Senegal at the Lac Rosa (Rose Lake). Kazakhstan’s crew of Kanat Shagirov and Alexandr Moroz (#206) gained the 13th place in the overall ranking. The other Mobile Racing Team's crew of Yuryi Sazanov and Arslan Sakhimov (#208) completed the race in the 16th place in the general ranking. French crew of pilot Jean Louis Schlesser and navigator Thierry Magnaldi won the Sonagol African Eco Race once again this year. The crew of Jacques Loomans/Frits Driesmans took the 2nd place and Stephane Henrard/Bruno Barbier gained the 3rd place. The international marathon rally Sonangol Africa Eco Race 2014 was held on the territory of three states Morocco, Mauritania and Senegal. 11 stages of the race made 5,580-kilometer route, contained the total of 2 997 kilometers of special sections. Review of the final stage