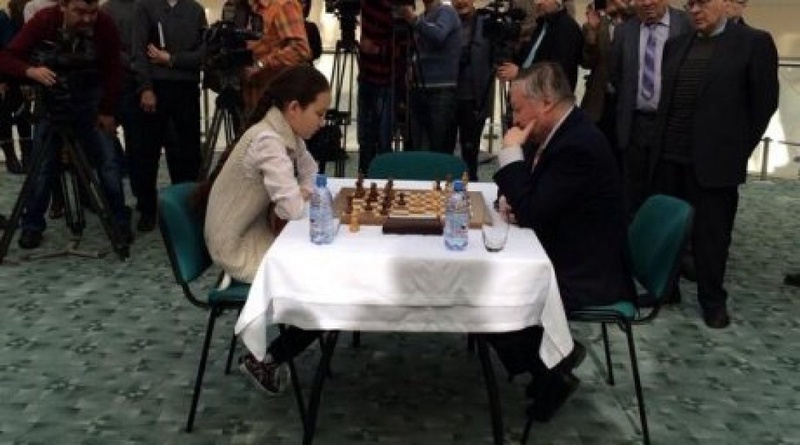 Zhansaya Abdumalik and Anatoly Karpov. Photo a courtesy of Anuar Nurpeisov
Famous Russian chess grandmaster Anatoly Karpov has lost one game to Zhansaya Abdumalik, the world's second youngest female grandmaster from Kazakhstan, Tengrinews reports citing Vesti.kz. On the opening day of the Chess Academy named after Zhansaya Abdumalik, the young Kazakh grandmaster played four games against the former World Champion Anatoliy Karpov. The 62 y.o. grand master lost one game to the talented 13 y.o. girl. “Anatoly Karpov played strongly and made some really difficult moves,” Abdumalik commented on the game with Karpov. The game took over 4 hours and Karpov won 2 out of 4 games and tied one. “I had to defend, but in the end there were no more defending moves left and I lost,” the Kazakh grandmaster said. Karpov noted that all the games were interesting. “The first blitz game was quick and I had to defend myself, which was not easy,” Karpov said. He praised the young talent and said that she was able to quickly come up with “probably the only right moves” in difficult situations. “My main goal is to become the World Champion among women. (…) I am training for it,” Abdumalik shared her plans for the future. At the press conference, Karpov noted that it might be too early for her to think about the World Championship this year, but given the good coach she had and a lot of practice it was an achievable goal. “It might be too early, but who knows, right?” Karpov smiled. In 2013, Abdumalik won the Men’s International Chess Tournament Brno Open 2013 in the Czech Tour Series. Karpov, considered by many the greatest chess player of all times, became the World Champion at the age of 24. He defended his title from 1975 to 1985 and lost to Gary Casparov. In recent years, Karpov has been involved in politics and humanitarian causes.