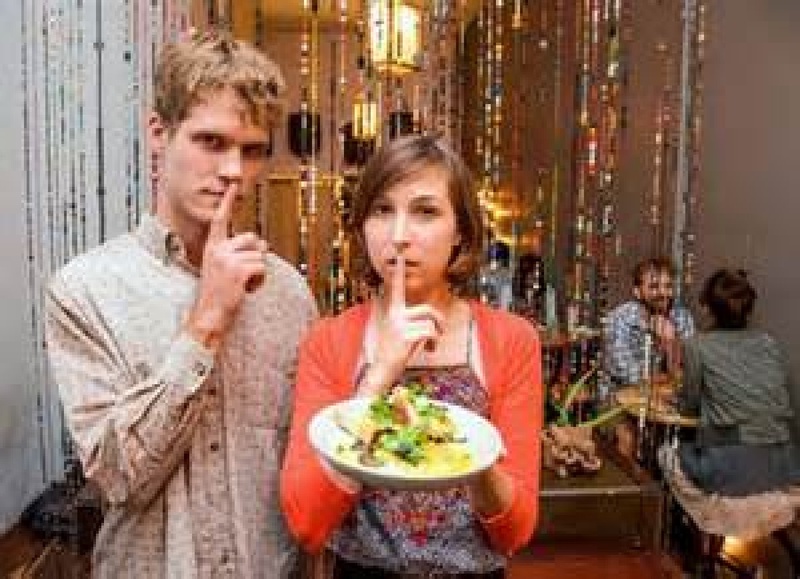 Photo courtesy of beforeitsnews.com
At the table, silence is golden, especially in noisy New York. That's the gamble a young restaurant owner is taking with patrons, who are prohibited from talking during four-course meals, AFP reports. The project, launched a month ago at Eat in Brooklyn's fashionable Greenpoint neighborhood, has created a buzz in a city where restaurants are often so noisy that they trigger routine complaints. Customers have to reserve days in advance for the privilege of eating without speaking or hearing a word on Friday or Saturday night in the small room that seats 25. "I want to provide the opportunity for people to experience the food with a kind of intention and attention to the experience that isn't usually afforded by a loud meal, especially in New York City," manager Nicholas Nauman told AFP. Customers who dare break the golden rule during the $40 prix fixe meal are forced to finish their plate on a bench outside. Sitting at long, wooden tables adorned with stoneware, the clients play along while tasting a menu based on local organic ingredients. For an entire hour, they savor the food, watch one another and don't say a word, as though cut off from the hustle and bustle of the outside world. Cell phones must also be turned off. Some struggle to keep serious in the face of an experience that is the polar opposite of the constant frenzy prevalent in New York, the city that never sleeps. Accolades from all around "We're bringing our own intentionality to it as well," explained the restaurant's chef Elsa Schmitt, using a philosophical term for the mind's power to stand in for things or concepts. "We know what is about to take place so we're bringing our own energies to it." As the dinner ends, after dessert, the silence ends. Nauman, 28, breaks the silence first with a "thank you guys," and is greeted by applause from his customers. "It was very enjoyable," said chemist Kevin Stokely. Morgan Yakus, who like most clients was in her 30s, spoke of the almost transcendental experience as an "internal dialogue of your mind, saying all kids of things." "I wanted to laugh. You're going through stages but by the end, you're in a really zen, relaxed stage," she said. Alison Wise came with her boyfriend, and the couple was won over as well, though for different reasons. "It was a really nice way to spend time together without any of the pressure of coming up with anything to say," she said. At first, Nauman had hoped to organize one silent meal per month. But his haven of silence in a hub of sound was so popular that it quickly became a weekly affair.
Malians pick new president in crucial run-off