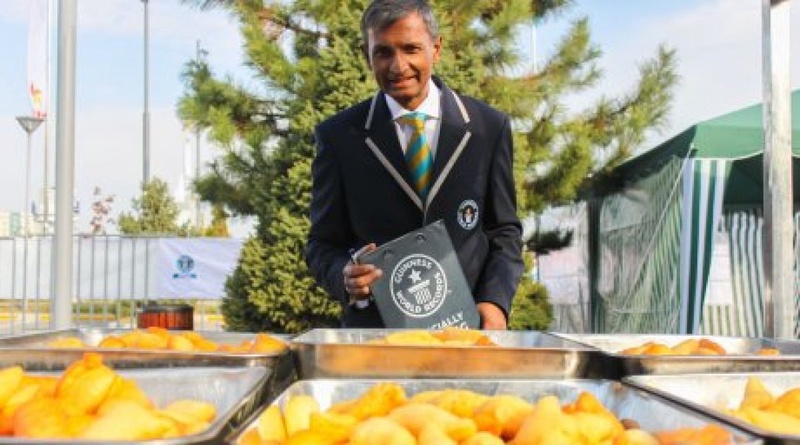 ©MEGA Alma-Ata
The world record by the number of cooked and eaten baursaks was set in Kazakhstan during the second part of MEGA Almaty mall opening earlier this month, Tengrinews reports. Baursak is a traditional variety of doughnut-like pastry in Kazakhstan. It consists of fried dough made of flour, yeast, milk, eggs, margarine, salt and sugar. Ten chefs cooked 667 kilograms of baursaks, that were eaten by the mall visitors in less than two hours. The attempt to set the record was successful and Kazakhstan was included into the Guinness Book of World Records. The official judge of the Guinness World Records Pravin Patel arrived from London to register the record. He officially registered the record in the The most number of cooked and eaten doughnuts (baursak) category. Journalist and producer Madi Mambetov and chief editor of Cosmopolitan Kazakhstan magazine Maya Akisheva were the independent witnesses from Kazakhstan. The previous record was set in May 2009 in Kuwait, when 500 kilograms of glazed donuts were cooked. The Kazakhstan chefs used 470 kg of flour, almost 6.5 kg of yeasts, 108 liters of water and 108 liters of milk, 7 kg of salt, 13 kg of sugar and more than 12 kg of margarine to cook the record number of baursaks. Nearly 25 000 baursaks were cooked. The festive opening of the new MEGA Almaty mall took place on November 1. Almaty Akim (Mayor) Akhmetzhan Yessimov and president of Astana Group Nurlan Smagul took part in the ceremony. President of Kazakhstan Nursultan Nazarbayev visited the mall one week before the opening. The floor area of the second part of MEGA Almaty makes 78 852 sq meters. The total floor area of both parts of the mall is now 164 482 sq meters. The second part of the mall was designed by British architecture company Chapman Taylor. By Azhar Ashirova