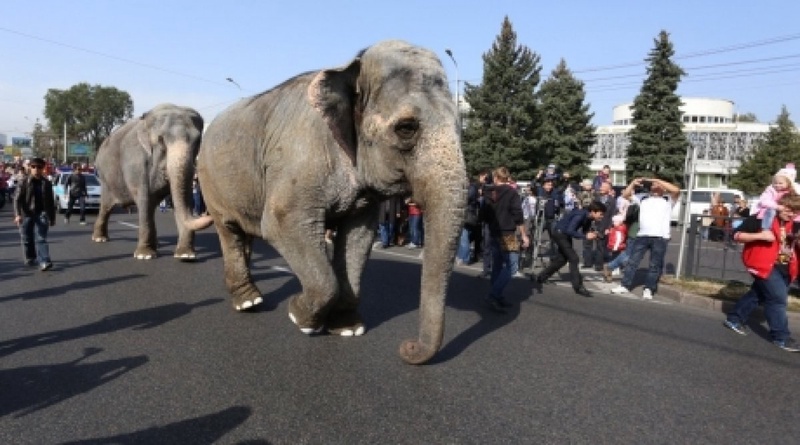 ©Yaroslav Radlovskiy
Elephants have marched Almaty streets for the first time in 23 years, administrator of the company that organized the circus troupe's tour Dmitry Te told Tengrinews. Two elephants, six ponies and two horses took part in the procession accompanied by tamers and a police car. It was expected that camels and chimpanzees would be on the streets of the city as well, but the weather in Almaty was not good enough for them to stay outside for several hours. According to the elephant tamer Sergey Gulevich who has been working with animals for over 15 years, the animals behaved well during the march. "African elephants Jennie and Magda from Poland are both 45 years old. Elephants can live for up to 80-90 years," he added. The march is part of the tour of Warsaw circus "Savanna Mysteries" troupe in Almaty from October 13 to November 10, 2013. According to the Polish troupe's representative Leonid Labo, this is the third time the troupe is in performing Almaty as part of their world tours. The Warsaw Circus will celebrate its 50th anniversary in 2014. "The cavalcade tradition is a way of advertisement. A way to let people know that we really have the animals that we declare in our program," Labo explained. The Polish circus is planning to come to Kazakhstan next time only in five years, in line with the tour schedule, he said. By Azhar Ashirova