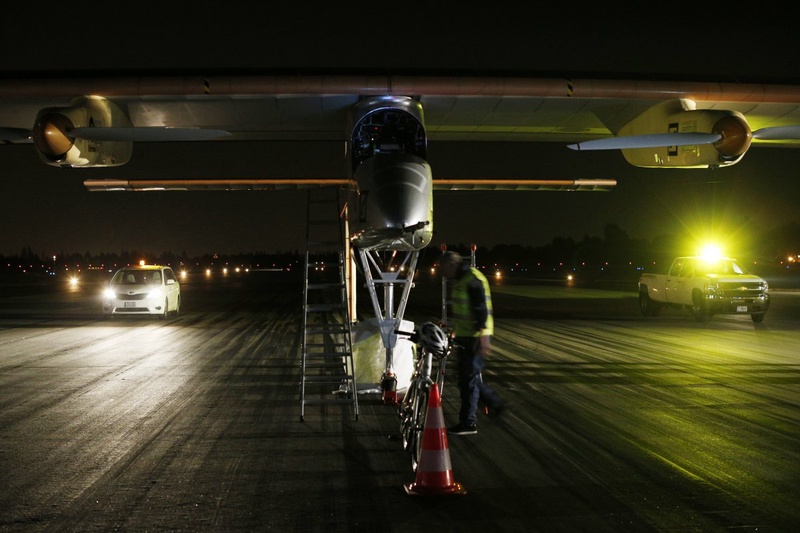 ©REUTERS
The first manned aircraft that can fly day and night powered entirely by solar energy was to leave Texas for Missouri Monday, and will use a "revolutionary" inflatable hangar to replace one damaged in last week's Midwest tornadoes, AFP reports. Powerful storms that hit the St. Louis, Missouri area late Friday rendered Solar Impulse's hangar at Lambert-St. Louis International Airport unusable, organizers of its current US flight said. As it sets out on the third leg of its US flight, a statement said that "to protect the aircraft upon landing... Solar Impulse will deploy a revolutionary inflatable structure for the first time" when it arrives in Missouri early Tuesday. The Solar Impulse project, founded and led by two Swiss pilots, aims to showcase what can be accomplished without fossil fuels, and has set as its "ultimate goal" an around-the-world flight in 2015. The first leg of Solar Impulse's US tour took place on May 3, when Swiss aviator Bertrand Piccard flew the aircraft from the San Francisco, California area to Phoenix. On that initial leg, the plane -- which has a slim body and four electric engines attached to enormous wings -- flew at an average speed of about 30 miles (49 kilometers) per hour. The aircraft set a new distance record on May 23 when it landed after the second leg of a cross-country US tour. The previous distance record was attained by Solar Impulse one year ago on a 1,116 kilometer (693 mile) flight from Switzerland to Spain. Now, Piccard will take off Monday on a a 21-hour flight -- his longest flight in the single-seat cockpit to date. The Solar team will have just a few hours to set up an inflatable hangar to park the plane. "The stopover in St. Louis during the crossing of the United States is very important and symbolic for Solar Impulse," the organizers said. St. Louis was chosen as the Midwest stopover to pay homage to aviation pioneer Charles Lindbergh and his "Spirit of St. Louis," the first plane to fly from New York to Paris non-stop. Energy provided by 12,000 solar cells powered the plane's propellers. The plane can fly at night by reaching a high elevation of 27,000 feet (8,230 meters) and then gently gliding downward, using almost no power until the sun comes up to begin recharging the solar cells. The US itinerary allows for up to 10 days at each stop in order to showcase the plane's technology to the public. Another stop is planned in the US capital Washington before the trip concludes in New York in early July. The stopovers will allow Piccard and Borschberg to share duties and rest between flights. A dashboard showing the live speed, direction, battery status, solar generator and engine power, along with cockpit cameras of both Piccard and his view from the plane, are online at live.solarimpulse.com