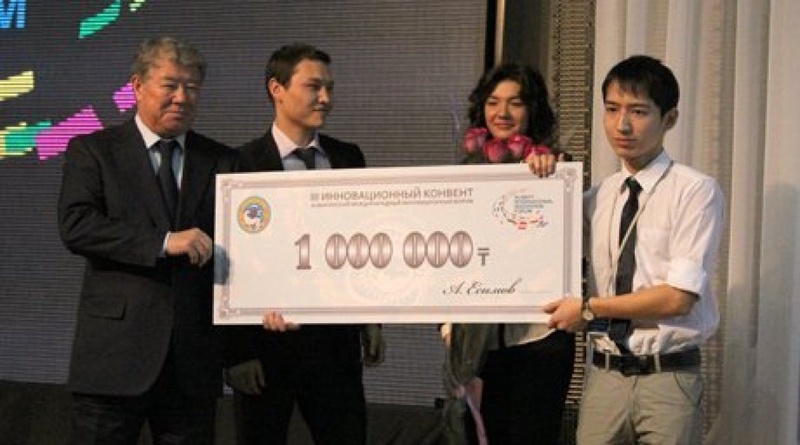 Almaty student received 1 million tenge for his invention. Photo by Vladimir Prokopenko©
The student of the International University of Information Technologies in Almaty who developed equipment for easy parking received 1 million tenge ($6.7 thousand) for his invention, Tengrinews.kz reports. The winners of three contests 50 innovation ideas for Kazakhstan, Innovations in action and Start-up innovations were announced at the International Innovations Forum during the 3rd innovation convent in Almaty. Young inventor Dinmukhamed Kubankhodzhayev with his Easy Parking device won the Start-up innovations contest in Social necessity category and received a check for 1 million tenge. A small gadget receives signals from the sensors placed on the car. Thanks to the device the driver can see everything around the car inside the radius of 4 meters. Awards were also given to the authors of the project of original advertisement structure, developers of Smart Time mobile application that will help Almaty citizens choose clothes and the authors of the first Kazakhstan cloud service project for accountants called Accounting Planet. A lot of attention was given to ecological projects in the start-ups contest. This category was topped by the young innovators who proposed to create a branched cycling system using Al-Farabi Kazakh National University as its headquarters. The students held a poll and found out that 80 percent of the 500 polled were ready to use bicycles if the infrastructure is developed sufficiently. “We will launch training courses for those who cannot ride a bicycle. We will teach road safety as well. We would like to create a bicycle “library” for those who don’t have a bikes of their own. The students will be registered in the special bicycle park, just like in a library. Choosing a bike, they will pay a certain fee that will be returned to them after the bike is returned to the park,” the author of the idea Yekaterina Berkutova said. The last to win a 1 million tenge check was the project of inside air cleaning. The prize checks were handed to the winners by Almaty Akim (Mayor) Akhmetzhan Yessimov. He checked into all the projects and stressed that there was a great need for such forums because a special attention had to be given to innovations. By Vladimir Prokopenko