Space flight of Kazakh astronaut Aidyn Aimbetov to the International Space Station is a milestone event for Kazakhstan, TengrinewsTV reports citing the Chairman of the Aerospace Committee of Kazakhstan’s Ministry of Investments and Development Talgat Mussabayev.

The Soyuz TMA-18M spacecraft carrying Aidyn Aimbetov, veteran Russian astronaut Sergei Volkov and European Space Agency astronaut Andreas Mogensen – the first Dane to fly to space - blasted off on Wednesday, September 2, at 10.37 a.m. (Astana time) from the Baikonur space launching facility in central Kazakhstan, once used by Soviet space pioneer Yuriy Gagarin for his historic flight to space back in 1961.

Aidyn Aimbetov has become the third Kazakh astronaut to fly to space after Toktar Aubakirov in 1991 and Talgat Mussabayev in 1994, 1998 and 2001 years. 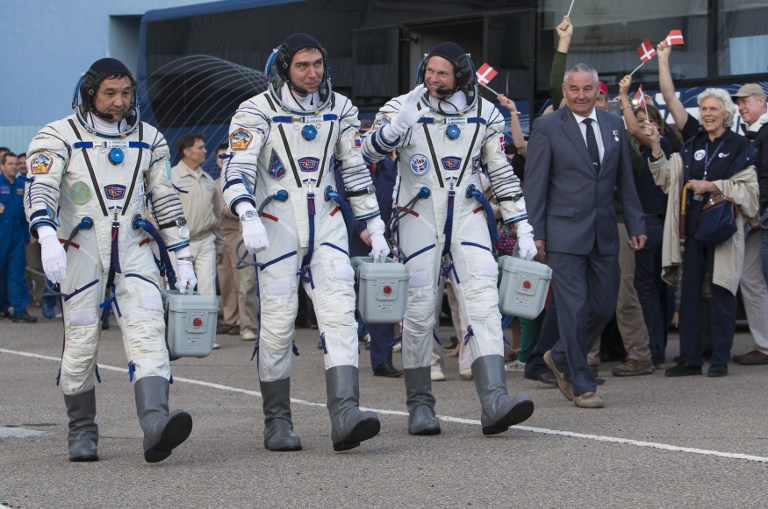 Aidyn Aimetov after launch. Frame from live broadcast of Roscosmos.

A lot of people watched the launch of the spacecraft from Baikonur including Kazakhstan's Deputy Prime Minister Berdybek Saparbayev, chairmen of Roscosmos, Kazcosmos and European Space Agency as well as family members of the astronauts.

“Today it is a historic day for our country! Today the third Kazakh has flown to space. We have witnessed this great start and separation (of stages) in 526 seconds, that went according to plan. Today it is also a historic day for the Baikonur cosmodrone, as it marked the 500th launch from the Gagarin Launchpad, from which I also flew three times as you remember. I am proud of this. I am also proud of Kazcosmos, which had prepared its representative for this flight. I wish the crew members a good flight, success and normal operation on board of Mir (Peace) station and spaceship as well,” Mussabayev said.

Earlier today the spacecraft successfully docked Poisk (MIM-2) module, the lesser research module of the ISS. It took two days for the spacecraft to dock to the ISS, instead of the usual six hours scheme, as earlier the ISS had to raise its orbit to avoid space debris. To reach the station that is orbiting the Earth at 28,800 kilometers per hour, the spacecraft needed to have the same speed and be in the same orbit, which was difficult to accomplish in just six hours.

In fact, until 2013 Russian Soyuz spacecrafts had always spent two days or 34 orbits chasing the station, but from 2013 onwards Russian Space Federal Agency decided to switch to the six-hour scheme.

Only Russian austronaut Volkov will remain aboard for the next 4-6 months, while Mogensen and Aimbetov will return to the Earth on Soyuz TMA-16M with Gennady Padalka, who is currently aboard the ISS, on September 12.

Kazakhstan's Aidyn Aimbetov was the last astronaut  to join the team, after famous British soprano Sara Brightman, who was scheduled to fly to the ISS under a contract with US-based Space Adventures company that sells multi-million-dollar space flights, called off her almost $50 million space trip in mid-May because of personal family reasons. Her back-up - Japanese Satoshi Takamatsu - was expected to fly instead of Brightman, but he also withdrew.

Selected for the first and only Kazakh astronaut class in 2002 out of 2,000 candidates, he trained in Russia as a astronaut at Star City for the next six years.

He was initially scheduled to fly to the ISS in autumn 2009, but his flight was canceled due to the global financial crisis that made Kazakhstan implement austerity measures and thus, cut the funding.

Aimbetov is conducting a number of studies during his space flight.