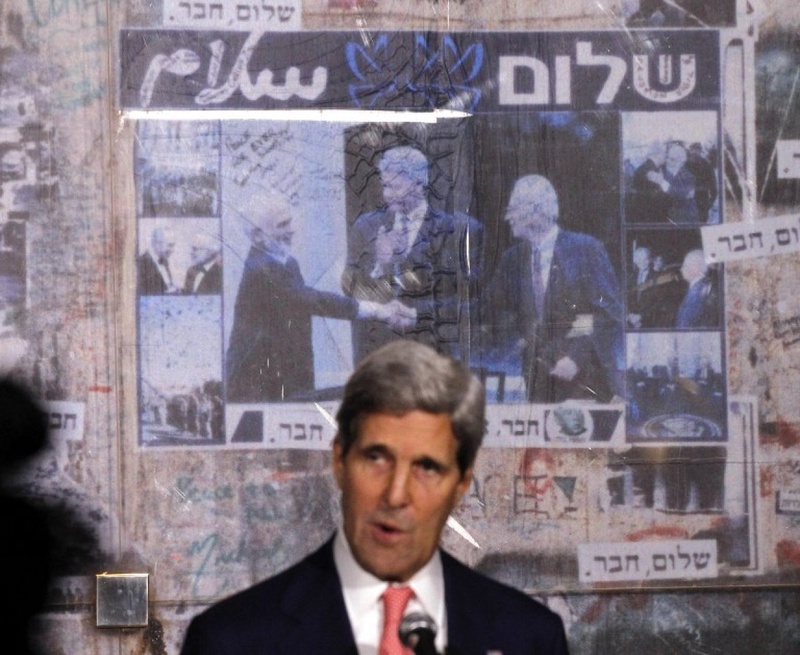 U.S. Secretary of State John Kerry is pictured in front of a photo showing U.S. President Bill Clinon, Jordan's King Hussein and Yitzhak Rabin, as Kerry marks the 18th anniversary of Rabin's assassin
US Secretary of State John Kerry will hold talks Wednesday with Israeli and Palestinian leaders to try to keep the peace process from collapsing, urging them to reach a long-elusive deal, AFP reports. Only a few hours after Kerry arrived Tuesday in Israel on a new mission to bring the two sides together, a Palestinian official said peace negotiations have stumbled. The official said the Palestinians would refuse to continue participating in direct talks as long as Israel fails to halt settlement building. In a dramatic, symbolic message, Kerry headed first for the Tel Aviv square where Israel's prime minister Yitzhak Rabin was assassinated 18 years ago to honour the memory of "a great man of peace". Rabin, who memorably shook hands with late Palestinian leader Yasser Arafat on the White House lawn, was gunned down on November 4, 1995 by a right-wing Israeli extremist opposed to concessions in the peace talks. Laying a wreath at a memorial in the square, Kerry recalled how just before he was shot, Rabin had been singing a song of peace with President Shimon Peres. "We are now 18 years since that moment and it is clear that we need voices ready to sing a song of peace, loudly, with courage, with the same determination prime minister Rabin showed with his quest for peace," Kerry said. "He dared to take the risks for peace, not just because it was important to take the risks, but that it was vital to secure the future of Israel and the region." Kerry's words were clearly a message ahead of his talks Wednesday with Israeli Prime Minister Benjamin Netanyahu and Peres in Jerusalem, and Palestinian president Mahmud Abbas in Bethlehem. But a senior Palestinian official, who asked to remain anonymous, told AFP that the Palestinians would refuse to continue the talks as long as Jewish settlement on the West Bank proliferates. "The Israeli side is determined to continue its settlement and we cannot continue negotiations under these unprecedented settlement attacks," he said after a stormy meeting of Israeli and Palestinian negotiators. "The Palestinian-Israeli negotiations broke down during the session on Tuesday night," he added. 'Time for peace' Local media earlier reported that Israeli negotiators sought to have the separation barrier that cuts through the West Bank serve as the border of a future Palestinian state. "Israel's opening position was that the border be the route of the separation barrier, and not the 1967 lines as the Palestinians have demanded," public radio reported, a story that also ran in the top-selling Yediot Aharonot newspaper. Israel's public radio reported the Israeli and Palestinian teams met for the 17th time Tuesday, but a Palestinian official told AFP no negotiations happened. The Palestinians insist borders should be based on the lines that existed before the 1967 Six-Day War, when Israel seized Gaza and the West Bank, including Arab east Jerusalem. But Netanyahu has rejected any return to the 1967 lines as "indefensible", saying it would not take into account the "demographic changes on the ground" -- a clear euphemism for Jewish settlements. Israel began work on its sprawling "security fence" in 2002 at the height of the second intifada or uprising, and has defended its construction as a crucial protective measure, pointing to a drop in attacks inside Israel as proof of its success. The Palestinians, who refer to it as the "apartheid wall", say the barrier is a land grab, pointing out that when complete, 85 percent of it will have been built inside the West Bank. There was no confirmation of the reports from Netanyahu's office, which has refused to comment on the content of the ongoing peace talks in line with a US-requested media blackout since they resumed in late July. Kerry's arrival comes as Israeli press reports spoke of a new US approach to present a proposal for an interim agreement. Kerry has flatly denied the existence of any new plan. "Let me categorically dispel any notion that there is anything other than the track that is formally engaged in between Israel and the Palestinians," he told reporters in Riyadh on Monday. "There is no other plan at this point in time." But a Western source quoted by the Maariv daily on Tuesday said Washington had "not yet" drafted a position paper. "This idea is still in its preliminary stages and work is just now beginning on it," he said.
Malians pick new president in crucial run-off