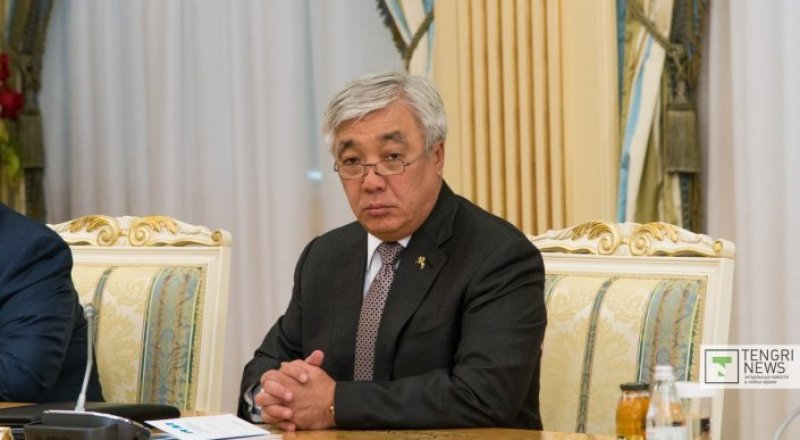 Today, August 27, Kazakhstan and the International Atomic Energy Agency have signed the agreement that establishes the international nuclear fuel bank on the territory of Kazakhstan to provide fuel to countries that do not possess their own uranium enrichment technologies and prevent nuclear proliferation, Tengrinews reports.

A briefing was held following the signing of the agreement in Astana, where Yerlan Idrissov told about the measures being undertaken by Kazakhstan to protect the storage from terrorists. “I would like to note that low-enriched uranium is not attractive for terrorists. Still, we are making every effort with the IAEA to adopt measures to prevent terrorists from getting access to the bank in any possible way. Believe me, the Ulba plant has all the necessary safety measures to prevent that,” Yerlan Idrissov assured.

“Against the backdrop of the current situation in the world and the surge in violence, unfortunately, no country is immune to terrorism. But I want to assure that the government of Kazakhstan, our law enforcement authorities and special services are working hard to ensure security. There is a wide range of measures in place and there are agencies inside our country who professionally conduct anti-terrorist work on a daily and hourly basis," Yerlan Idrissov added.

Many local people raised concerns about the possible negative effect of the bank on the region’s environment, which has already suffered a lot from the big number of enterprises operating there. Moreover, Ust-Kamenogorsk city is located some 200 km away from Semey city, which in the past was used by the Soviet Union to test its nuclear weapons. 456 tests were conducted in total between 1949 and 1989. The memories of it are still fresh.

However, Kazakhstan’s Foreign Minister Idrissov asserted that the nuclear bank was completely safe. “The bank of low-enriched uranium is very safe. It will not produce radioactive wastes. Used fuel will of course be disposed of in accordance with the rules of the IAEA. Of course, we know that it is forbidden to deliver used fuel from other countries to our country. We will observe all the standards of the IAEA, including rules of transportation of fuel," Yerlan Idrissov said.

Diector General of the IAEA said that Iran could deliver its excess stockpiles of uranium, which it is not allowed to keep under the agreement signed between the country and P5+1 in July, to the bank. “We agreed that Iran will have access to the IAEA nuclear fuel bank in Kazakhstan. We have an agreement with the country. In two years, all the works will be completed,” Yukiya Amano said.

The nuclear fuel bank basically provides countries with access to low-enriched uranium, so that they do not have to build enrichment facilities of their own, and thus reduces the risk of any such facilities being misused to enrich uranium to weapon grade level. Furthermore, it provides access to fuel for IAEA members in case of their inability to obtain it from the global commercial market.

Back in 2009 Kazakhstan’s President Nursultan Nazarbayev suggested hosting the international nuclear fuel bank in Kazakhstan, which ranks first in the world by uranium production and second by reserves after Australia. Kazakhstan is among the few countries that have voluntarily gave up nuclear weapons - it dismantled the world's fourth largest nuclear arsenal that it inherited from the Soviet Union after its collapse. The proposal to make Kazakhstan the host country of the nuclear fuel bank was approved of by the IAEA in 2011.

The bank will be based at the Ulba Metallurgy Plant located in Ust-Kamenogorsk city in eastern Kazakhstan. The plant has been storing nuclear materials, including low-enriched uranium, for over 60 years since it was created in 1949.

Initially, the final agreement was expected to be signed in 2013, but due to some technical matters that the sides have been negotiating until this very day, the signing of the agreement was postponed. A draft agreement was signed in May this year. Under the agreement, the IAEA will cover the costs of purchase and delivery of low-enriched uranium, purchase of equipment and its operation and other technical means required for proper functioning of the bank, whereas Kazakhstan will bear the costs related to storage of the nuclear fuel - pay the electricity and heating bills, provide offices and personnel.

The IAEA estimated the cost of the bank at $150 billion, which can ensure the bank’s operation for at least 10 years. As for Kazakhstan, hosting the bank on its territory will cost around $10-15 thousand a year.

After the signing of the document, it will take around two years to finalize the work on creation and opening of the storage. In 2017, the bank will start accumulating low-enriched uranium through open tenders.