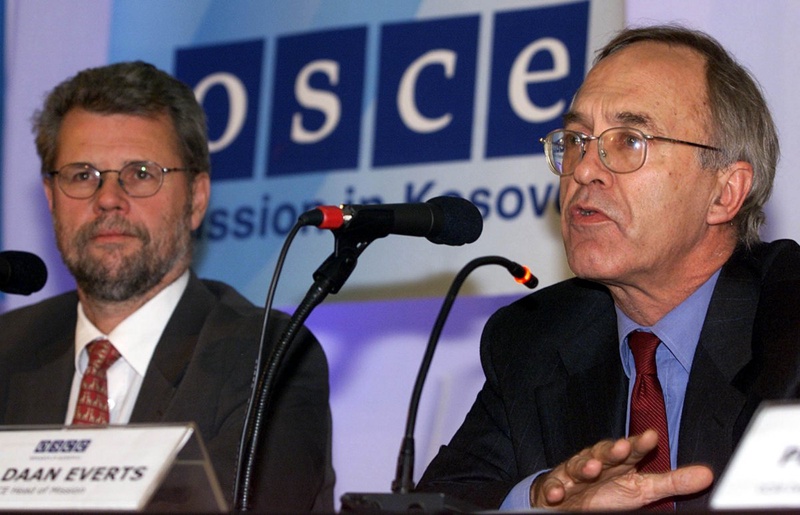 Daan Everts, head of the Organisation for Security and Cooperation in Europe (R). ©REUTERS
The 2012 US elections were conducted in a "professional manner," but "real concerns" remain, AFP reports citing international observers. "The electoral process enjoys broad public confidence," Organization for Security and Cooperation in Europe mission chief Daan Everts said in a statement the day after the vote that saw President Barack Obama win a second four-year term. "At the same time, there are real concerns over issues such as voting rights, the accuracy of voter lists, the transparency of campaign finance, recount procedures and access for international election observers." Due to the high mobility of many Americans, some voters were listed on multiple electoral lists in different states. Conversely, some 50 million of the 237 million eligible American voters were never registered at all, according to OSCE estimates. In certain states, access to voting was denied to convicted criminals who had completed their sentence, contrary to international norms, the group added. And politically polarized issue of whether and how to require voters to show identification also raised concerns, with officials struggling to strike a balance between preventing fraud and facilitating access to voting. Finally, the recount procedures in certain states still face shortcomings, 12 years after the Florida recount that followed unclear results in the 2000 presidential election. Everts refrained from naming the worst offenders, saying problems can vary from one jurisdiction to another. The question of granting international election observers access to polling stations grew more salient after Texas threatened to arrest observers under a local law that considers OSCE activities as interference. "I want to dismiss the notion that we're a bunch of UN invaders from another planet," Everts joked at a press conference, noting that the OSCE had come "at the invitation of the US government." However, eight states, including Alabama, Florida, Iowa, Michigan, Mississippi, Ohio, Pennsylvania and Texas, denied OSCE observers access and two more, Alaska and Tennessee, offered only restricted access, which the OSCE refused.