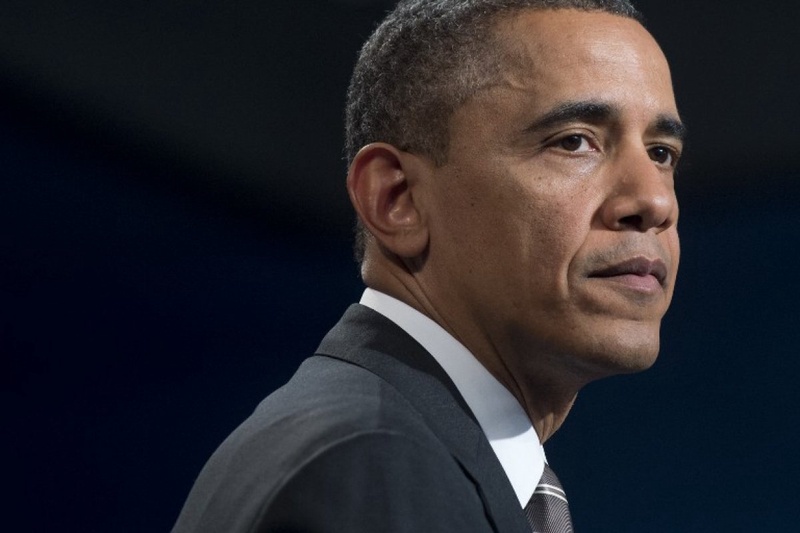 US President Barack Obama speaks.
Barack Obama may have the upper hand against Republicans in a high-risk new spending showdown, but a drawn-out clash would likely damage the economy and put his presidential legacy on the line, AFP reports. The United States is just five days from its latest self-inflicted flirt with economic disaster -- an $85 billion hit from automatic and indiscriminate spending cuts -- but no one is burning the midnight oil to find a way out. Instead, Obama is in full-bore campaign mode, blaming Republicans for apocalyptic scenarios after the so-called "sequester" hits, blitzing local media markets and hitting the road to build an indictment against his foes. He rails about "meat cleaver" cuts that could cost public sector jobs, stall the economy, hinder a superpower military, furlough FBI agents, drain resources from emergency services and clog up US airports. Obama's tactics mark an evolution in his political style, after often fruitless efforts to compromise with Republicans during his first term. Now, the president is playing an outside game, waging a campaign to force Republicans to agree to raising more revenue -- through higher taxes on the rich -- to combine with less severe spending cuts to cut the deficit. So far, it has been an unfair fight. Obama is exploiting his office's unique power to grab headlines, and will this week begin swooping on Air Force One into different states to highlight the cost of the cuts. "Presidents have a major advantage, regardless of who they are, over their opponents in Congress," said David Johnson, CEO of political consulting firm Strategic Vision. "This president is very skillful at using imagery, and employing the bully pulpit to show how the sequester will affect everyday lives, teachers and law enforcement. He is also still basking in the glow of re-election." Obama's argument has the benefit of clarity. "Are Republicans in Congress really willing to let these cuts fall on our kids' schools and mental health care just to protect tax loopholes for corporate jet owners?" he asked in his weekly address Saturday. "Are they seriously prepared to inflict more pain on the middle class because they refuse to ask anything more of those at the very top?" Republicans refuse to agree on revenue hikes, arguing that Obama simply wants to bring in more cash to spend on a bloated government. Obama is playing to his strengths. He is better at building grassroots coalitions than playing Washington's inside power game. He is also being careful not to repeat his first-term mistake of getting bogged down in the White House. This week alone, he brought in local television networks for interviews, won flattering headlines after an off-the-record chat with top journalists and appeared with firefighters who fear the impact of the sequester. A USA Today poll showed that 49 percent of Americans would blame Republicans in Congress for the impact of the sequester, while only 31 percent would blame Obama. Senior White House officials say that when the sequester hits and Americans see the consequences, Republicans will be forced to seek compromise. Republican Senator Tom Coburn said Sunday that the sequester was a terrible way to cut spending because it slices funding indiscriminately and does not distinguish between worthy and unworthy programs. But he complained that there had been "no leadership" from Obama in realizing America had a spending addiction. "The problem is, is an excessive, bloated, big federal government that's highly inefficient and highly ineffective," Coburn told "Fox News Sunday." Whether Republicans will take all the blame if the sequester hits will be tested once spending cuts begin taking effect on Friday. "It's a very risky strategy, I think the Obama administration believes and hopes that this sequester will take effect but then quickly be resolved," said Tom Baldino, a professor of political science at Wilkes University. "But if it drags on, it will come back to hurt Obama. It's... a high risk, high payoff or high cost of failure." While Republicans would prefer targeted spending cuts and to safeguard the military's resources, they are so far holding firm. Cutting spending has almost religious significance for many conservatives, and some lawmakers, fearing a Tea Party primary challenge, may bank the sequester cuts -- however extreme. That could leave Obama in a tough spot, watching the sequester hit growth and nudging a high unemployment rate still higher, dampening hopes to add a strong economic recovery to his presidential legacy. A prolonged paroxysm in Congress could also delay Obama's other priorities. "This is going to be a major diversion from the president's other initiatives, like gun control and immigration reform," said Johnson. "He is going to be losing political capital the longer it goes on."