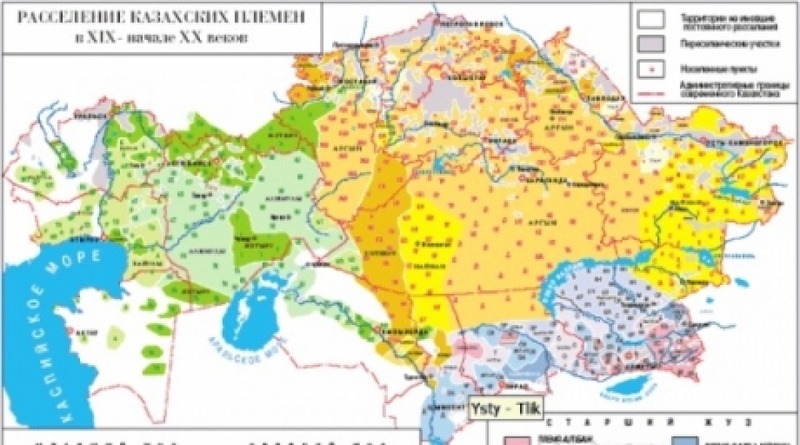 Map of settlement of Kazakh tribes in the beginning of 20th century
Megapolis magazine tried to answer the question of why Kazakhstan officials keep their tribal appurtenance secret. The edition interviewed several famous persons: head of the State Service Agency Alikhan Naimenov, Ph.D. Ilyas Suleimenov who earlier suggested to appoint aksakals (tribe leaders) from each Kazakh tribe to the Assembly of the People of Kazakhstan, deputy Director of Kazakhstan International Bureau for Human Rights and Rule of Law Denis Dzhivaga, senator Svetlana Dzhalmagambetova, Majilisman Kuanysh Sultanov and Advisor to the President Yermukhamet Yertysbayev. The discussion was triggered by a recent initiative of the neighboring Kyrgyzstan: Kyrgyz officials were obliged to disclose their affinities by the law. Their Kazakhstan peers, however, are allowed to keep their tribal appurtenance to themselves, the magazine writes. According to Suleimenov, it is improper to compare Kazakhstan with Kyrgyzstan. “The situation in Kazakhstan has not reached the boiling point, like in Kyrgyzstan; we have still kept our game rules,” the philosopher said. Besides, he added that professional qualities are the most important factors for any employee while speaking of tribal appurtenance is tactless. “Another thing is that unfortunately all the power and all the best positions in the economy are held by southern clans. This is another issue. But it doesn’t mean that every official has to state his ethnic group and tribe in his profile. Ethnic identity and duties are completely different things,” Suleimenov said. Senator Svetlana Dzhalmagambetova, Majilisman Kuanysh Sultanov and Advisor to the President Yermukhamet Yertysbayev are quite skeptical about discussing their tribal appurtenance. “We want Kazakhstan people to be united. How can we reach the unity if Kazakhs start dividing themselves into tribes and clans? Kazakhs, being the state-forming ethnic group in Kazakhstan, have to be united,” Senator Svetlana Dzhalmagambetova said. “We have to bring up competitive young people who would adequately face modern challenges. If we start dividing into singers and warriors, we will not achieve much,” Majilisman Kuanysh Sultanov said. “I cherish our traditions, but I wouldn’t idealize our past and project it into our future.” “I don’t know which tribe or union I belong to. I am Kazakh. We live in the twenty first century, but still think by the categories of the Mongol-Tatar invasion era,” Advisor to the President Yermukhamet Yertysbayev said. Deputy Director of Kazakhstan International Bureau for Human Rights and Rule of Law Denis Dzhivaga said that he saw no impairment of human right in disclosing tribal appurtenances. “As far as I know, Kazakhs are proud of their appurtenance to one tribe or another,” Dzhivaga said. Kazakhs were historically divided into 43 tribes and three Zhuzes (tribal unions). The tribes of one Zhuz were related to each other and were considered descendants of one forefather. Population of every Zhuz lived in certain geographic areas. Every Zhuz had its own features in traditions and culture, but was still closely connected with other Zhuzes. Every Zhuz had major activities that it was famous for: one was famous for its craftsmen, another for warriors and the third for good managers and strategists. But this division does not mean that Kazakh tribes were completely separated from each other. Common culture, language and nomadic lifestyle connected Kazakhs more than anything else. In times of war, all the tribes united into one powerful force to protect their land.