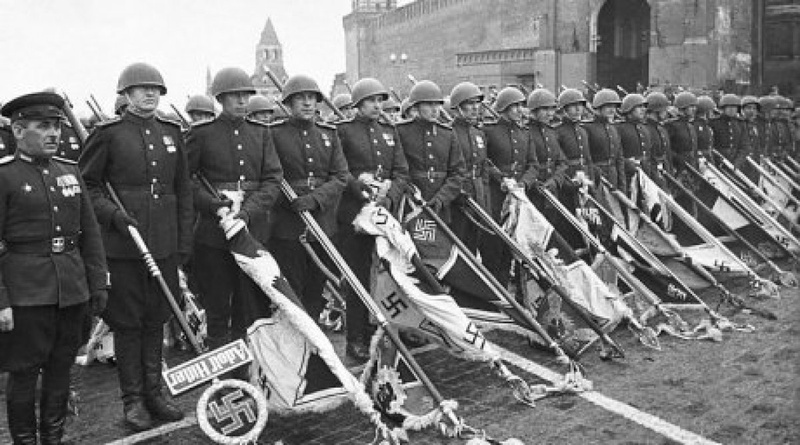 The annual celebrations of the Victory Day will be taking place on the 9th of May. The holiday is dedicated to remembering the victory of the Soviet Union over Nazi Germany in 1945 in the Great Patriotic War as the WWII is known in the former Soviet states. The surrender documents were signed in the late of night on 8 May 1945. it was already May 9 Moscow time. Celebrating this day has become a tradition in Kazakhstan.

During the War, along with all other 15 Soviet republics the Kazakh Soviet Republic was wholeheartedly engaged in the war effort. More than 1 million 200 thousand soldiers were mobilized from the republic. They formed 12 rifle and 4 cavalry divisions, 7 rifle brigades, and about 50 separate regiments and battalions.

In the beginning of the War the Soviets suffered defeat after defeat. The loss of lives reached millions. In this situation, the Kazakhstanis were sent to the most dangerous parts of the front line.

The first major victory for the Soviet was the pushback of the German forces in the defense of Moscow. The Panfilov’s Men took part in the defense of Moscow at the critical point of the World War II. The bravery of Panfilov division is remembered far beyond Kazakhstan and one of its officers’ words became legendary. He was a political officer named Klochkov who declared: "Russia is great, yet there is nowhere to retreat - Moscow is behind us!" His words resonated all across the Soviet Union. The other group of soldiers who fought with bravery for Moscow was the battalion under the command of Lieutenant Baurzhan Momyshuly. The legendary commander was awarded the title of the Hero of the Soviet Union. Another Kazakh, Tolegen Toktarov, fought his way into the headquarters of the German command in the village of Borodino and killed five officers during the battle for Moscow. All in all, he killed 115 enemy soldiers and officers.

The list of Kazakh heroes also includes defenders of Leningrad. One of them, Sultan Baimagambetov closed the embrasure of the enemy bunker with his own body to allow his comrades to cross the opening intact. Pilot Sergey Morozov blew a column of enemy tanks with his burning plane.

Many other Kazakhstani pilots showed themselves true heroes of the war. Captain Gastello’s feat was repeated by a Kazakh pilot Nurken Abdirov who sent his burning plane into the German tank column. Legends were made about a Kazakh virtuoso Talgat Bigeldinov who destroyed enemies in the air. He was awarded the title of the Hero of the Soviet Union twice. Pilot Sergei Lugansk also won this title twice: he personally destroyed 36 enemy planes, and 6 more in group battles.

The Stalingrad Battle was yet another critical milestone in the course of the WWII. In this battle the 38th Division under the command of Colonel Ghani Safiullin performed the feats of bravery that cannot be overestimated. The soldiers destroyed the 297th Infantry Division of the Nazis and captured its commander Brebber along with his staff. Moving forward, the 38th forced the 14th Panzer Corps to surrender. For its accomplishments the 38th was awarded the name of 73rd Guards Divison.

In another bloody battle for Kursk, in 1943, Captain Giorgi Igishev’s battery accomplished a massive feat. Almost all the officers and soldiers were killed in the unequal battle near the village of Samodurovka in Ponyrovsky district. However, they destroyed 19 tanks and 150 enemy soldiers.

Deminers from Kazakhstan also proved themselves heroes. The soldiers of the156th separate mechanized infantry battalion built several bridges in Volokolamsk district and a river crossing in the Northern Donets Maslova's Wharf. All of these, they had to build under non-stop German fire.

The warrior-railwayman Petr Bakarev from Kostanay built bridges and repaired railroads, which were constantly destroyed by the enemy. Zhabarkan Asainov daringly repaired damage on a railroad under enemy fire. He even continued the repair after suffering several gunshot wounds. His feat of bravery saved a hospital train transporting wounded soldiers. For their exploits Bakarev and Asainov were both awarded the Hero of Socialist Labor titles.

During the war, female soldiers also exemplified courage and stamina. Two Kazakh girls became famous in the Soviet Union. They are commonly known as Alia and Manshuk. Alia Moldagulova was the one to lead the attack of her battalion against the Germans. In one of her letters she gave a general portrait of a woman at war: “I’m writing from a deep trench, there are many trees around. We are meeting the Germans face to face. I have a helmet on my head, a grenade on my belt, and rifle in hand." Later, she killed a German officer while dying herself from fatal wounds.

Manshuk Mametova is a famous female hero of the war as well. Coming from Western Kazakhstan oblast she faced the ferocity of the German offensive. She alone, for three hours, defended against furious attacks of enemy soldiers. Before dying on the battlefield she killed 70 enemy soldiers.

Marshal of the Soviet Union Georgy Zhukov highly praised the exploits of soldiers from the Kazakh Republic. In his memoirs he wrote that the platoon from the republic under the command of Lieutenant Kenzhebai Madenov was the first to enter the Berlin Town Hall. "The soldiers showered the lobby and the corridors with hand grenades. Each room had to be conquered with a battle," he wrote.

Lieutenant Rakhimzhan Koshkarbayev together with the Russian Grigory Bulatov were the first to set the red Soviet flag on the pediment of the Reichstag. Koshkarbayev later remembered that the distance of 260 meters of open space to the building they crept under heavy fire for over 7 hours.

Later, the Victory Banner was hoisted on the roof of the Reichstag by Sergeant Kantarija and Sergeant Egorov. Then, the native of the village Uspenka in Pavlodar oblast Pavel Vasilevsky provided them with covering fire cover. Aleksey Kovalev of Aksai town in Atyrau oblast of Kazakhstan also helped in this feat. Pilot Alimkulov Dzhilkibaev of Almaty and a native of the same village Uspenka Nigmet Naukenov also stormed the Reichstag.

Toleuhan Shaidildinov was among those who commemorated their words on the walls of the Reichstag: “I am Kazakh, from Kazakhstan, fought in battles from Moscow to Berlin. We have stormed the Reichstag and won. Shaidildinov Toleuhan.”

A native of Almaty, Mihail Korobov was the first to set telephone connection with the headquarters of capitulated German General Krebs. This helped in starting the negotiations between the interim German government and the Soviet command.

Kazakhstan’s Hamit Sulejmenov and Toleutai Aksholakov participated in the historic meeting with U.S. troops on the Elbe River in late April 1945, when the war was coming to an end.

Sagadat Nurmagambetov, the first Minister of Defense of sovereign Kazakhstan, ended the war in Hitler's office in his bunker. "A thick carpet, a table, a globe - all left from the failed master of the world, who had covered the planet with millions of corpses. One did not want to linger long in the office... the "Office of War" was wiped out. Only an inconspicuous mound was left... "Nurmagambetov recalled.