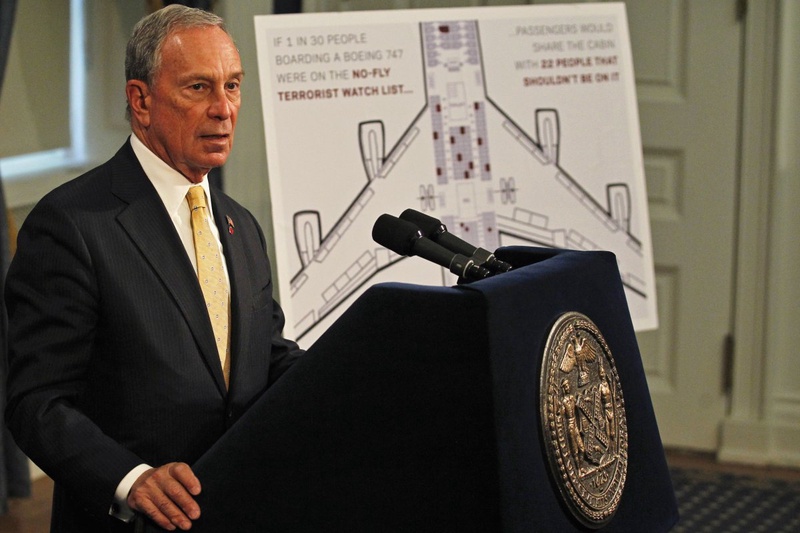 ©Reuters/Brendan McDermid
Billionaire Michael Bloomberg will go down as one of New York's most transformative mayors but he has divided an electorate set to elect his polar opposite, AFP reports. The 71-year-old tycoon, who founded the successful news and financial data company Bloomberg PLC, steps down on January 1 after a record 12 years. Thanks to a vast wealth that beholds him to no one, he won respect -- if not love -- for driving forward an agenda and avoiding some of the shabby compromises of office. According to a recent Wall Street Journal/NBC poll, only 18 percent of registered voters believe he has performed poorly. But incredibly, two-thirds want New York to take a different direction and Bill de Blasio, the candidate who has done the most to exploit anti-Bloomberg sentiment, is set to be elected the city's 109th mayor on Tuesday. "What the Bloomberg reign most profoundly demonstrated is the power of an extremely wealthy man who is beholden to no special interests," according to Forbes. "Bloomberg effectively created his own special interests and used the government to turn a city into a data-driven, health-conscious image... of himself." Bloomberg loves reeling off statistics as testament to his success: the lowest murder rate in 50 years; at 52 million, a record number of tourists; life expectancy up by 2.5 years in the last 12 years. Even detractors acknowledge the achievements. Violent crime, the great scourge of New York until the 1990s, continues to drop. From an average of six murders a day in 1990, the city of 8.4 million now sees less than one homicide a day. Bloomberg's aggressive public health policies,like banning smoking in bars and restaurants, have contributed to a 50 percent decline in teen smoking and been copied in many cities. He overhauled the city waterfront, widened green spaces, launched the popular city-bike program and restored business optimism after the attacks of September 11, 2001. He has won plaudits as a campaigner for tighter gun laws, particularly after the Newtown school massacre that left 20 children and six adults dead in neighboring Connecticut last December. Interviewed for the November 18 issue of Forbes, Bloomberg was triumphant about his legacy. "Our problems here now are all problems of success. You say people can't afford to live here, except that there are no vacancies," he was quoted as saying by the business magazine. "Our problem now is that everyone wants to go to our public schools. Traffic? If you don't want traffic, go to Detroit." But the criticisms also stack up. And there is another, less savory record: a homeless population of 50,900 -- 21,300 of them children. Public advocate de Blasio has campaigned heavily on the widening gap between the city's richest and poorest, and the middle class struggle to make ends meet. The method seen as bringing down violence -- stop-and-frisk -- has been criticized as racist and a violation of rights enshrined in the US constitution. And his move to change the law and lift the two-term limit for mayors, was unpopular. He won only a narrow victory in 2009 despite an expensive campaign. Others complain that Bloomberg over-stepped the line between protecting public health and personal choice. A judge blocked his attempts to ban super-sized sugary soft drinks on health grounds. His vast wealth -- Bloomberg pilots a helicopter and flies by private jet to a second home in Bermuda on weekends -- has painted him as divorced from reality. Forbes ranks him the 13th richest person on the planet and the 29th most powerful, just one place below the Indian prime minister, leader of the world's biggest democracy. But he strongly rejects as "just campaign rhetoric" accusations that he has not done enough for the poor, telling New York Magazine recently that some 300,000 jobs have been created "at the bottom end." Bloomberg's future remains unclear. His philanthropy is legendary and he has held up former US president Bill Clinton and Microsoft founder Bill Gates as examples of good work he would still like to do. But in the short term, he told Forbes he would be off in January on his first vacation with his girlfriend in 12 years -- to play golf in Hawaii and New Zealand. By Brigitte Dusseau
Malians pick new president in crucial run-off