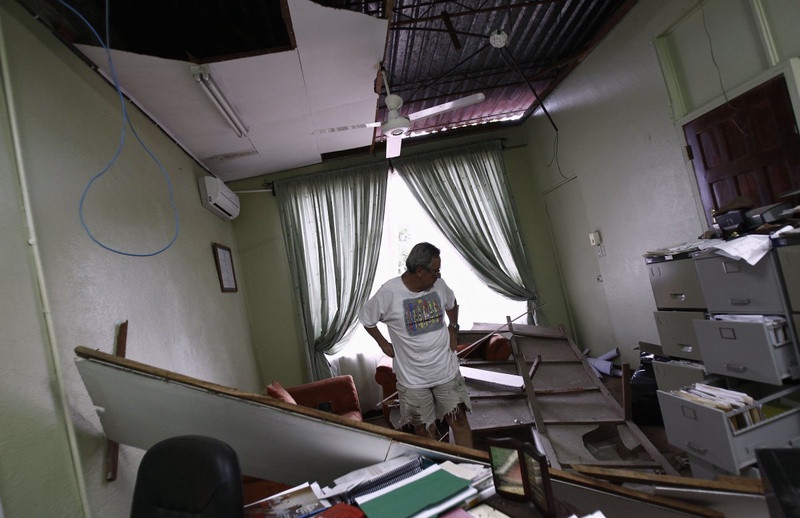 ©REUTERS
California has long been braced for the Big One, but now a proposed new early warning system seeks to give the US state's residents vital extra seconds before a major earthquake hits, AFP reports. The $80 million plan, presented by lawmaker Alex Padilla and experts from the California Institute of Technology (Caltech), would use technology already in place in Japan to issue warnings from underground sensors. The alerts could give tens of seconds' early notice to residents of Los Angeles, for example, if the start of a major temblor were detected a significant distance away from the crowded West Coast megalopolis. Automatic systems could trigger brakes on trains to slow them down before the quake hit, preventing potentially catastrophic derailments from adding to the disaster. "A fully developed earthquake early warning system would provide Californians critical seconds to take cover, assist loved ones, pull to the side of the road or exit a building," said Padilla, presenting the plan Monday. "It could allow time to stop a train or power down other critical infrastructure ... it would also speed the response of police and fire personnel by quickly identifying areas hardest hit by the quake." Geologists say a quake capable of causing widespread destruction is 99 percent certain of hitting California in the next 30 years. A magnitude 7.8 quake could kill 1,800 people, injure 50,000 more and damage 300,000 buildings. A 6.7-magnitude earthquake in Los Angeles left at least 60 people dead and did an estimated $10 billion damage in 1994, while a 6.9 quake in San Francisco in 1989 claimed the lives of 67 people. Padilla's plan would be the biggest such warning system in the United States -- but other countries, including Japan, Taiwan, Mexico, Turkey, Romania, Italy and China already have or are building such a network, Padilla said. In Japan's cataclysmic 2011 earthquake, underground sensors detected the first tectonic shift and sent out telephone text messages to some 50 million people within seconds, according to the LA Times. The plan was unveiled weeks after a study by Caltech and Japan's Agency for Marine-Earth Science and Technology (JAMSTEC) warned that California's big population centers could be more at risk than previously thought. Specifically, it said that so-called "creeping segments" on earthquake fault lines such as California's San Andreas Fault, previously seen as a buffer that could limit the impact of quakes, could in fact make them worse. The study's findings "imply that a much larger event may be possible than is now anticipated -- one that might involve both the Los Angeles and San Francisco metropolitan areas," it said. Michael Gurnis, head of the Caltech Seismological Laboratory, said the system "would save lives and help California in many ways if it is rolled out as a fully operational system. "For decades Caltech and UC Berkeley have worked with the US Geological Survey on science that can help the public in the event of a major quake," he added. "Earthquake Early Warning is a ripe area for development of a system that can provide a few seconds to tens of seconds of advance notice for many people in the event of a major earthquake." Los Angeles is on the so-called Ring of Fire, which circles the Pacific and has produced a number of devastating earthquakes, including Japan's March 2011 quake and tsunami, which killed thousands of people. California is arguably overdue for the Big One. While major temblors in recent years have shaken Japan, Indonesia, Chile, New Zealand and Mexico, the US West Coast has been spared.