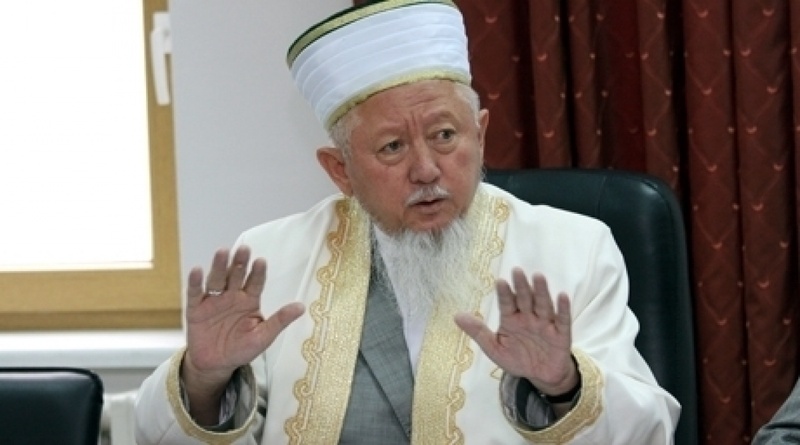 Supreme Mufti Absattar Hkadzhi Derbessali. © Yaroslav Radlovsky
Spiritual Authority of Muslims of Kazakhstan has made a stand against the legislative ban on prayer rooms in public bodies introduced in the new legislation on religion, Novosti Kazakhstan quoted Supreme Mufti Absattar Hkadzhi Derbessali as saying October 1. “The Spiritual Authority of Muslims is opposed to Article 7 of the law which introduces legislative ban on namaz prayer in public bodies”, the statement reads. September 29 Kazakhstan’s Parliament adopted a new law on religion that among other things introduces ban on prayer rooms in public bodies, education and healthcare facilities, military units. Following the adoption of the law Head of the Agency for Religion Kairat Lama Sharif commented that «Muslim public servants have a lunch break to pray. (…) It’s enough time to go to a mosque and get back. It’s just like getting to a nearest store to buy something (…) Muslims are allowed to combine two prayers”. “We submitted our suggestions to the Parliament for consideration with regards to this particular article. Unfortunately, they were not taken into consideration (…) the ban on prayer in public bodies, education and healthcare institutions can provoke hostility towards the state. There are no guarantees that people forced to choose between religion and work will not side with dubious religious movements and political forces”, Supreme Mufti Absattar Hkadzhi Derbessali believes. Spiritual Authority officials believe that the legislative ban on prayer rooms “is not the best solution in countering extremism and terrorism”. “Given that 72% of the population confess Islam, we believe it is necessary to allow prayer not to set artificial barriers to work or study”, Supreme Mufti said.