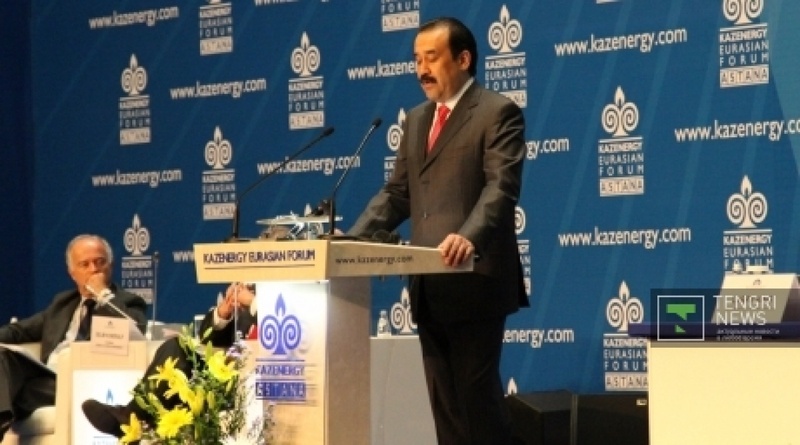 Kazakhstan Prime-Minister Karim Massimov
Kazakhstan will keep on developing its nuclear industry, PM Karim Massimov stated when speaking at the opening of the VI KAZENERGY international forum in Astana October 4. “We are taking our first steps to develop the nuclear industry. In June we adopted a new energy sector development which implies building a nuclear power plant”, the PM said. According to him, “the disaster at Fukushima should be a lesson … however, we believe Kazakhstan has all the preconditions in place to develop the sector”. KAZENERGY Eurasian Forum, an influential dialogue platform uniting the entire energy industry and bringing together oil and gas companies, is held at the Astana-based Independence Palace October 4-5, 2011. The 6th KAZENERGY Forum in Kazakhstan focuses on 20 Years of Sustainable Growth, New Horizons of Investments and Stable Cooperation. According to the official web site of the event , the key speakers on the Kazakhstan’s side will include PM Karim Massimov; Asset Issekeshev, Vice Prime Minister and Minister of Industry and New Technologies; Sauat Mynbayev, Minister of Oil and Gas; Erzhan Kazykhanov, Minister of Foreign Affairs; Timur Kulibayev, Chief Executive Officer of the Samruk-Kazyna Sovereign Wealth Fund; and others. The event is organized by Association KAZENERGY that unites more than 50 major players in the oil, gas and energy business – extracting, transporting, servicing, geophysical, uranium -producing and other transnational companies. KAZENERGY Association was established on 2 November 2005 as an independent non-commercial union of legal entities, which is challenged to promote creation of favorable conditions for the dynamic and sustainable development of the fuel and energy sector of the Republic of Kazakhstan.