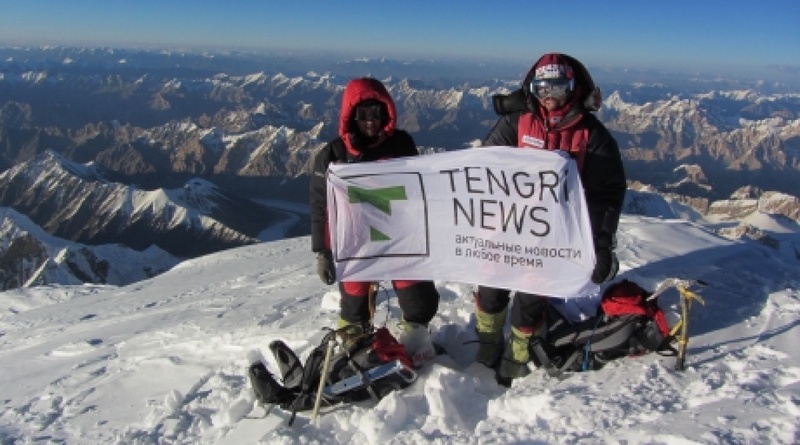 Tengrinews.kz flag on the top of K2. Photo courtesy of Maksut Zhumayev
The international expedition to K2 almost lost proof of the ascent the alpinists made on August 23, Kazakhstan alpinist Maksut Zhumayev told Tengrinews.kz. “On the way home we had a dangerous situation during crossing the Chogori River flowing from Chogori glacier. We were crossing the river in several stages. The accident happened when my part of camels almost crossed the river. The thing is that the water carries large stones and one of them hit the front camel’s leg. The camel fell down, dove into the flow and made the whole group go with the flow one after another. The camels started swimming down the river. I was scared that the camera with the pictures from K2 top may get wet and I will lose everything. I was lucky we were helped out of water. Pictures were saved and Kyrgyzs kept coming to me and saying “God saved you”,” Zhumayev said. The way down from the mountain top was full of adventures as well. During the trip from the first camp to the Chinese camp it turned out that one of the alpinists, Darek Zalusky from Poland, frostbit his feet. “He had blisters, the skin turned blue, but Vassiliy made him take all necessary medications. After that Darek was walking down very slowly, but everything went well. It took us long time to go down; we were so tired that we didn’t really care where and when we reach the final destination point. We got to the base camp, where we were met with warmth. I was given a bottle of beer, but I didn’t even manage to open it, because I fell asleep almost immediately. That is when moral and physical stress of the last two weeks was over. The first greetings were received the next day. This was the first day of life,” Kazakhstan sportsman said. According to Zhumayev, the last 7-day trip was the most difficult in the whole 2.5-month period of the expedition. That is when alpinists had to make many difficult decisions. “This ascent was the most difficult in my life. It was snowing a lot, when we reached the first camp on August 16. Then we took a serious decision to ascend the mount in any weather. August 18 at 3 a.m. we started the final trip. The talk of Ralf Dujmovits and Gerlinda Kaltenbrunner happened before that. Ralf was yelling that the trip is too dangerous and we need to go back. Gerlinda was sure that it was the most important moment and she had to take the risk. Vassiliy Pivtsov and me did not interrupt their conversation. We would have continued to go up anyway, even if they both went down. In the end Ralf left us and Gerlinda kept on moving. She trusted our judgemnet. And she was sure that we will succeed,” Zhumayev said. Right after the alpinists were left without one of the most strong and experienced team member, the expedition got into a landslide. Vassiliy Pivtsov was positioned first and he faced the attack and all the alpinists managed to hold their ground. “We were lucky it was light and fluffy snow and it didn’t drag us down. We got a binary feeling when we survived this moment. There was a relief and a fear that this landslide is not the last one we will have to face on our way to the top. Tommy Heinrich decided not to risk and also went down. We continued up the slope for some more time and then heard the scream. Screaming in the mountains isn't anything usual. It was a scream for help. Gerlina thought that Ralf changed his mind and followed her and got into a landslide. In the end when we almost decided to go down, we saw Tommy. It turned out that he got into a small landslide but managed to get out of it. Later he successfully got down to the base camp,” the alpinist said. On August 23 at 1 a.m. the alpinists went for the first attempt to reach the top of K2, but changed their mind because of a severe frost. “It was thirty or forty degrees (below zero), it was hard to say. I started acending the first 50 meters of rope from the camp, but realized that that small distance alone was enough for me to start freezing off my feet. The guys who was waiting for me to clime my distance felt the same - they could get their legs warm either. We decided to wait till dawn. We left at 6 a.m. and reached the top only at 6 p.m. Gerlinda was the first of us to reach the top and we followed her shortly. We had no emotions at that moment. We spent 1.5 hours at the top and started the trip back to the base camp, that trip took us two days.” September 2 the team of alpinists arrived in Almaty, where they were met by their friends and families, as well as alpinists and everyone who spent the last 2.5 months following the expedition's progress. “My son Issatai turned 3 during my trip. First thing after returning I kept my promise to my son and bought him a toy fire-fighting car,” Maksut Zhumayev finished his story.