Kazakhstan’s President Nursultan Nazarbayev has commissioned the Ice Palace in Astana that will become a home arena for Kazakhstan's Barys hockey club from Astana, Tengrinews reports.

“Today we celebrate the commissioning of one more important social facility. Actually, it is a huge Ice Palace. This is a large stadium of Olympic scale designed for 12,000 seats. It includes an ice arena plus a hockey academy, a 50-meter Olympic swimming pool and another swimming pool for synchronized swimming,” Nazarbayev told the journalists.

According to him, Astana needs to pay more attention to winter sports because it has long winters and to should take advantage of it.

“We are discussing its (the Ice Palace) further use not only as a local-scale venue, but also as an international one – to organize big concerts here, national and international tournaments. This venue should pay off via its activities – this is a very important point. It concerns not only this building, but also other sports facilities in Astana. It is worth paying attention to it,” Nazarbayev said.

Today many Kazakhstan’s regions have their own hockey stadiums. “Our team is in the 7th-8th place in the ranking of the Kontinental Hockey League (KHL). This is a good performance. I believe this stadium will inspire our athletes, and we will welcome more prominent international teams here, and our visitors will be happy watching this wonderful and harsh sport. Therefore, I congratulate everyone, especially athletes and young people on commissioning of this big facility,” the Kazakh leader said.

During his visit, Nursultan Nazarbayev also watched a small ice show performed by students of Barys Junior School, which told about the development of Kazakhstan’s hockey since the Hockey Federation was founded until the present days.

Kazakhstan's President also visited abrand store of Barys club located on the first floor of the Ice Palace, where he received a baseball cap and a fan scarve as a gift. President of Kazakhstan Hockey Federation Askar Mamin was the first buyer of the shop. He purchased a tracksuit, a set of t-shirts and baseball caps with Barys logo. The new Ice Arena hosted its first match on August 9, between Astana's Barys and Metallurg from Novokuznetsk, Russia, which ended with the victory of Barys team - 4:2. The game was held as part of the Sixth International Tournament for Kazakhstan President's Cup. 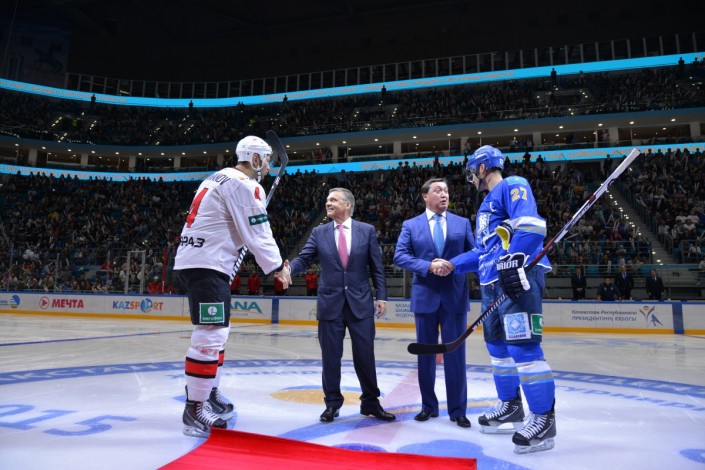