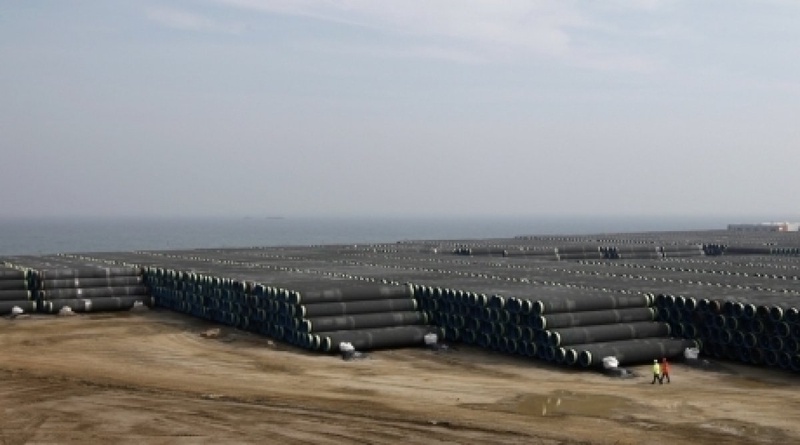 In an interview published by Azeri Turan Barosso said that the EU will move forward with the project, which is a part of the Southern Gas Corridor, an ambitious plan to bring gas from the Caspian Sea and the Middle East to Europe. “The EU is interested in receiving additional volumes [of gas] that TCP could bring and its positive impact on the security of supplies to Europe, and will continue to work constructively to make this happen,” Barroso said.


Barroso called TCP a “mutually beneficial project that serves the strategic and commercial interests of all the partners”. He also pointed out that Azerbaijan and Turkmenistan were strongly committed to the project. “We are still in the planning phase and we hope that the laying of the Southern Gas Corridor will contribute to accelerating the discussions for the TCP as well,” EU Commission President said.

He did not specify whether Kazakhstan was still committed to participating in the project. Although the Central Asian country was initially supportive of the project and is still interested in having an extra shipment route for its massive hydrocarbons deposits, it is strongly dependent on Russia and is unlikely to stand up against its large neighbor without a substantial backing from the West.

Earlier the Minister of Energy of Azerbaijan Natiq Aliyev said that the total cost of building the pipeline was estimated at $3 billion in the 1990s. However, the situation now is different and the cost has increased: laying a gas pipeline on Caspian seabed alone "may require one or two billion dollars". According to October 2013 statement of Russian Foreign Minister Sergey Lavrov, the overall cost of the project currently makes $10.7 billion. The cost may be overstated, but still gives an idea of the enormity of the task.

The source of funding for the project remains unclear. According to Rovshan Ibrahimov, head of the foreign policy department at the Centre for Strategic Studies in Azerbaijan, the EU might step in, however, it does not have the supranational mechanisms of reaching such agreements. On the other hand, the three Caspian states will have to take upon themselves the considerable risks associated with the project. In any case, implementation of the project will attract substantial foreign investment, much needed to boost the Kazakh economy. Besides, it will also allow Kazakhstan to sell gas at European prices instead of complying with Russia's price dumping habits.

The planned capacity of the pipeline is 30 billion cubic meters of natural gas per year at an estimated cost of US$5 billion. Turkmen gas will reach Azerbaijan, which will then be transported to Turkey via Baku–Tbilisi–Erzurum Pipeline and then from Turkey via Trans-Anatolian gas pipeline to Greece and Bulgaria.

There are plans to include Kazakhstan’s Tengiz field into the Trans-Caspian Pipeline project. In this case, the gas will follow the following route: Tengiz (Kazakhstan) - Turkmenbashi (Turkmenistan) - Baku (Azerbaijan) - Tbilisi (Georgia) - Erzurum (Turkey). The Baku-Tbilisi-Erzurum gas pipeline is already operational.

Tengiz oil and gas field is located in northwestern Kazakhstan. It is a very large field, its natural gas reserves are estimated at 1.8 trillion cubic meters of gas, besides it is developed by Tengizchevroil, a consortium dominated by American companies: 50% owned by American Chevron, 20% by Kazakhstan KazMunaiGas, 25% by American ExxonMobil, and 5% by Russian LukArco. So its participation in the project would clearly benefit both the European energy security and the investors.

Besides, presence of Kazakhstan's gas in the pipeline system will mitigate the risks of relying on Turkmenistan for gas supplies for Europe. The West have long been unhappy with the regime in Turkmenistan and found it had to extract any consent from the country, whereas Kazakhstan's foreign policies are much more flexible.

Disagreements over construction of the pipeline along the Caspian seabed is one of the project's main complications. Russia and Iran believe that the issue should be resolved with the consent of all the littoral countries. On the other hand, Azerbaijan, Kazakhstan and Turkmenistan believe that it is for two contracting countries to come to an agreement, not all five Caspian states.

Moreover, the Caspian Sea itself is a matter of territorial dispute among countries that cannot agree on the way to divide the world's biggest lake rich in hydrocarbons and sturgeons. Applicability of various international laws governing seas and oceans is questionable in case of the Caspian Sea since the Caspian is not exactly a sea, but rather an inland body of water. Besides, Russia explicitly opposes construction of a pipeline along the bottom citing both legal and environmental concerns.

Russia is opposing the project because if completed it will create an alternative route for gas to Europe bypassing Russia. The pipeline will link Turkmen and Azeri shores of the Caspian Sea - and the Kazakh shore and an option - for gas exports via Azerbaijan to Europe. This will allow Turkmen gas to circumvent Russia and Iran, which are currently transit countries for Turkmen gas. It will cancel Russia’s transit fees on Turkmen gas, reduce Russia's leverage against the West and limit its monopoly on export of energy resources to Europe. The issue is particularly pressing given the current complications with Russian gas reaching Europe via Ukraine.

Due to complications and too many parties involved for the decision-making process be simple, the submarine project has been in and out for nearly two decades already. It was suggested back in 1996, but Russian and Iranian opposition quickly put out the western flame. However, it was rekindled in 2006 when a sharp phase of the Russia-Ukraine gas dispute left European gas pipes empty. Kazakhstan joined the plans at around the same time. Then the project saw more discussions and more agreements and more indentions as it was slowing coming to a halt in the next ten or so years until the recent dramatic events in Ukraine once again spurred European fears of gas cuts and put the submarine pipeline project back high on the international agenda.

For Kazakhstan the project is of interest as an alternative route diversifying its hydrocarbon exports away from Russia and China. Because of its landlocked location Kazakhstan’s oil and gas industry is heavily dependent on Russia for export routes. For example, Kazakhstan’s Karachaganak field depends on Orenburg Refinery in Russia near Kazakhstan's border. Karachaganak is a very attractive field because its reserves are of gas condensate as opposed to ordinary natural gas fields. However, the possibilities of its expansion have been limited due to dependence on the neighboring country.

Kashagan oil and gas field that is yet to begin yielding was intended to bring some of the energy resources via Baku-Tbilisi-Erzurum to Europe and thus lift the Russian pressure from the region. However, the ongoing complications in the field including the problem of gas pipes corrosion that hinder transportation of gas, have undermined the initial plans and the European energy security.

Tengiz field was also opted for diversification: if Kazakhstan can link Tengiz to TCP and get its gas to the West bypassing Russia, it will alleviate some of its dependency on its large northern neighbor.

Concerning the bottom laying complications, there is an alternative, at least a temporary one, to laying the gas pipeline on Caspian seabed. Oil can be shipped from Kazakhstan and Turkmenistan across the Caspian Sea to Azerbaijan in oil tankers, so as gas, if a gas liquefying facility is in place.

There have been several developments that may hint that the West has become more serious about the tanker plans in recent months. Italian Eni and KazMunaiGas have agreed to build a shipyard at Caspian Sea. Among other types of ships that shipyard will be producing oil tankers.

Besides, since Kashagan is stuck with the pipelines-towards-the-shore problem it may also opt for tankers and ship hydrocarbons in the Western direction.

By Dinara Urazova and Tatyana Kuzmina