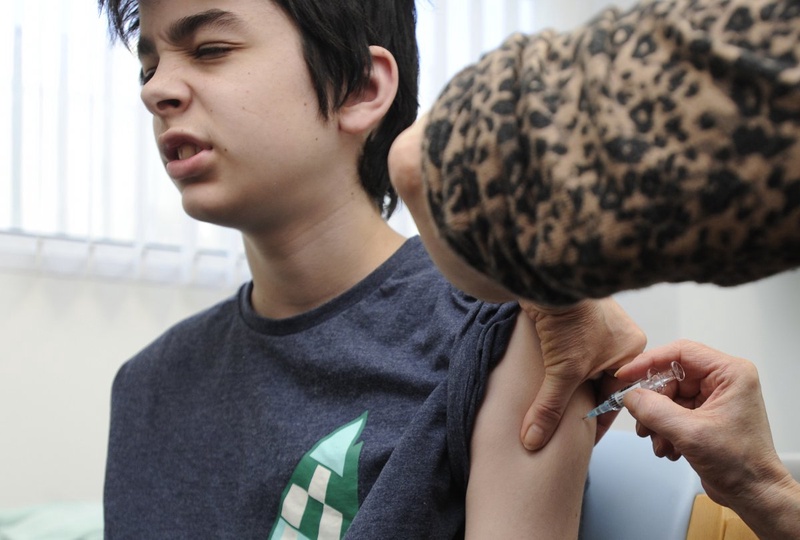 ©REUTERS
Researchers in China said Wednesday a trial vaccine provided "significant" protection against a virus that can cause potentially deadly hand, foot and mouth disease (HFMD) in children, AFP reports. In the final testing phase, the vaccine proved 90 percent effective, providing protection for at least 12 months against HFMD caused by the enterovirus 71 (EV71), said a study published in The Lancet. Since it was discovered in 1969, EV71 has caused major outbreaks of HFMD around the world, affecting mostly children and mainly in Asia. HFMD caused by EV71 has caused more than 2,000 deaths out of about six million infections, mainly of children, in the past decade, said the study's authors. It can also cause other, more severe diseases in young children, such as meningitis and encephalitis. The candidate vaccine was tested in a trial with more than 10,000 healthy children from six to 35 months of age at four sites across China. Half of the children were given the vaccine and half a placebo. "The vaccine was well tolerated," said a statement, and no serious side-effects were noted. HFMD starts with fever, painful sores in the mouth, and a rash of blisters on the hands, feet and buttocks, followed in some cases by more serious neurological, cardiovascular and breathing problems. Not to be confused with foot-and-mouth disease in cattle, sheep and pigs, HFMD is spread from person to person through direct contact. No vaccine yet exists against the EV71 virus. The study authors said there was no evidence their trial drug would work on coxsackievirus A16 -- a virus that often circulates with EV71 and is the main cause of HFMD, though in a milder form. In a comment published with the study, The Lancet described the results as a "notable advance" but said it was limited in dealing exclusively with the C4 strain of EV71 which is predominant in mainland China. It is thus not known whether the trial vaccine would also work on regionally specific strains. "This shortcoming affects how the findings can be applied to other countries in Asia," said the journal. "Future studies should assess serum immune responses across different genogroups." The comment pointed out that the youngest participants in the study were vaccinated at the age of six months, leaving younger infants vulnerable to EV71 infection. It also said that given the relatively low mortality rate from EV71 infections, the vaccine's major contribution would be to reduce hospital admissions. "The next step is to assess the appropriateness of including an EV71 vaccine in China's national immunisation programme, including a cost-effectiveness analysis," the journal stated.