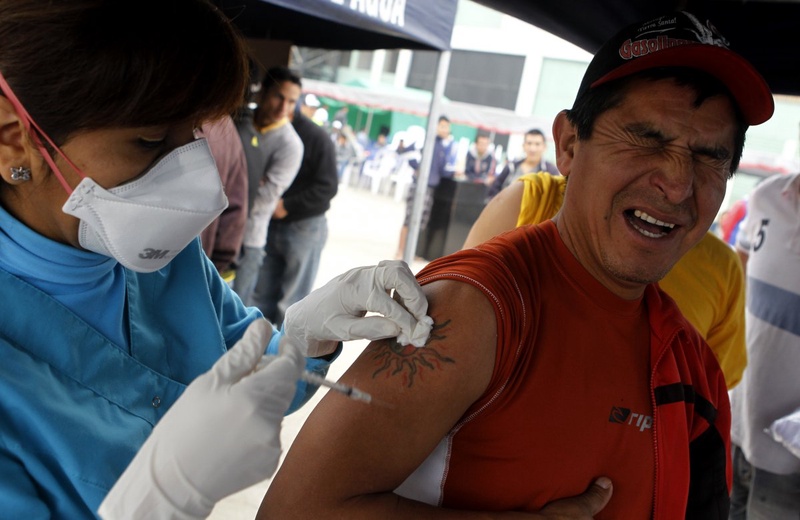 ©Reuters/Mariana Bazo
The flu vaccine is generally less effective for men than for women, scientists said in a study Monday, tracing the effect to higher levels of testosterone that curb the immune response, AFP reports. It has long been known that men are more vulnerable than women to bacterial, viral and parasitic infections, but scientists have never been able to clearly explain why. It was also known that men don't respond as strongly as women to vaccines against yellow fever, measles and hepatitis, said the authors of the study, which appears in this week's Proceedings of the American Academy of Sciences. The new research, using samples from 34 men and 53 women, suggested that the cause could be traced to testosterone: only men with higher levels of the sex hormone demonstrated the lower antibody response to the flu vaccine. Among men with lower levels of testosterone, the immune response was "more or less equivalent to that of women," said a statement from Stanford University, whose researchers collaborated with others at the French governmental research organization INSERM for the study. Previous studies on animals and in cell-culture experiments had previously suggested a link between testosterone and immune response, which creates inflammation as it battles the invasion of a pathogen. This latest study doesn't indicate a direct link between testosterone and the lowered immune response. Instead, the immune system's reaction was reduced by the activation of a group of genes that are also linked to a higher level of testosterone, explained Mark Davis, immunology professor at Stanford University. The researchers also considered an apparent evolutionary paradox -- wondering how natural selection could favor a hormone responsible both for characteristics such as strength and a taste for taking risks, and for weakening the immune system. They speculated that in prehistoric times, men's roles as hunters and warriors tended to expose them to more wounds and resulting infections. A decent immune response to these infections is an evolutionary advantage, but an overly abundant one -- which can occur in certain diseases including some virulent forms of the flu -- could prove more dangerous than the pathogen itself, they said. Thus, perhaps men with less aggressive immune responses tended to be better able to survive, the researchers said.