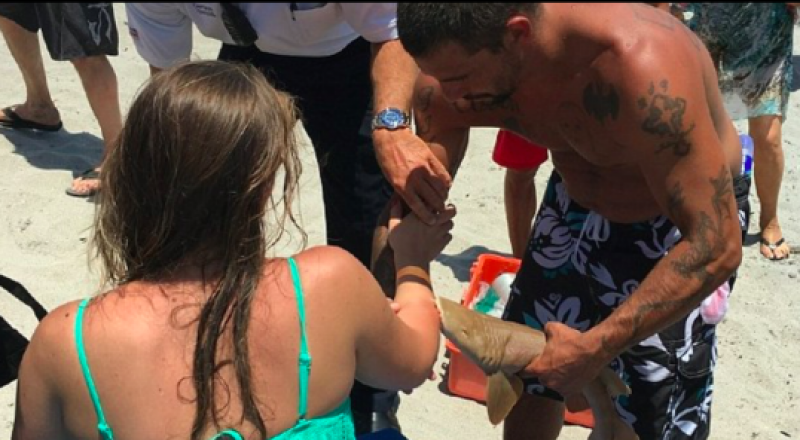 A woman with a shark clutching to her arm. Photo courtesy of Boca Raton Fire Rescue.

A woman in the US state of Florida was rushed to a hospital Sunday after being bitten by a shark -- with the whole animal still clutching on to her right arm, a local media report is cited by AFP.

The small nurse shark, which was about two feet (61 centimeters) long, was killed by a beachgoer soon after the attack, the Palm Beach Post reported.

The victim was an unidentified 23-year-old woman who was bitten while bathing at a beach in the coastal city of Boca Raton, city fire-rescue spokesman Bob Lemons told the newspaper.

Lemons said the woman was rushed to the city's regional hospital with the shark still attached to her right forearm.

"I have never seen anything like it," Ocean Rescue Captain Clint Tracy told the South Florida Sun-Sentinel. "Never even heard of anything like this."

Nurse sharks, which can grow to up to 10 feet (three meters) in length, are common along Florida's Atlantic coastline, and are normally peaceful creatures.

But one witness told the Sun-Sentinel that before the attack he saw swimmers bothering the shark and holding it by the tail.

The victim was initially calm when she approached a lifeguard station at the Red Reef Park beach seeking help.

A male companion was holding the shark and there was little blood, Tracy said.

"It was barely breathing but it wasn't letting go of her arm, like it was stuck to her or something," witness Shlomo Jacob told the Sun-Sentinel.

As time went by and a crowd gathered, the woman became agitated and when paramedics arrived they gave her oxygen.

Then they used a board to support her arm and the shark, placed her on a stretcher and drove to the hospital, Tracy told the newspaper.

According to the Shark Research Institute, nurse sharks are nocturnal creatures, and are often found lying motionless on the ocean floor in rocky coastal areas during the day.

The sharks eat small fish and creatures like lobster, squid, and sea urchins -- not human flesh.

Most grown nurse sharks are less than 9.8 feet (three meters) long, but are known to reach 14 feet (4.3 meters) in length.